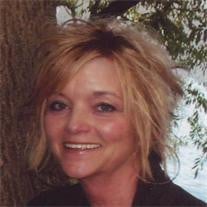 Christine L. Spehle, age 48 of Menomonie, WI passed away Thursday, April 19, 2012 at home, surrounded by her family. She passed away after a two and a half year battle with cancer, that she fought every step of the way. Christine Lucille Peterson was born on April 1, 1964 in Eau Claire, Wisconsin to Duane "Duke" and Carol (Knickerbocker) Peterson. She attended grade school in Great Falls, Montana and later moved with her family to Altoona, WI where she attended Altoona High School. This is where she met her future husband Gary Spehle in 1980. Chris and Gary were married in 1981 and two daughters, Sarah and Nikki, were born to this marriage. Chris received her Barber Cosmetology degree from CVTC and worked as a hairdresser for "My Style" in Menomonie for many years. Chris and Gary were reunited in marriage in Las Vegas on Sept. 6, 2002. Together they owned and operated Elk Point Resort, Colfax, WI since 2000. Chris loved her tropical vacations, her pets and a good party. She was a very giving person and will be sadly missed by all who knew her. Chris is survived by her husband Gary of Menomonie; her two daughters, Sarah (Gary) Golden of Colfax and Nicole (Brian) Scherer of Boyceville; two granddaughters, Jada Golden and Aryssa Scherer; her father and mother-in-law, Chuck and Alice Spehle of Colfax; special aunts, Wanda and Deb; and her dogs, Lola and Levi. She is also survived by many aunts, uncles, cousins, nieces, nephews and other relatives and friends. She was preceded in death by her parents, Duke and Carol Peterson and a brother Dave Peterson. There will be a Celebration of Life at 6:00 p.m. Tuesday, April 24, 2012 at Cedarbrook Church (N6714 470th St., Menomonie, WI 54751), with visitation from 2:00 until the time of the service also at the church. Olson Funeral Home of Menomonie is assisting the family.

Christine L. Spehle, age 48 of Menomonie, WI passed away Thursday, April 19, 2012 at home, surrounded by her family. She passed away after a two and a half year battle with cancer, that she fought every step of the way. Christine Lucille Peterson... View Obituary & Service Information

The family of Christine Spehle Obituary created this Life Tributes page to make it easy to share your memories.