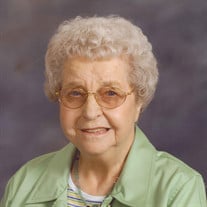 Christine B. Hannack, age 95, of Menomonie, WI passed away on Thursday, January 26, 2017 at the American Lutheran Home. She was born November 3, 1921 in the town of Stanton, Knapp, Wisconsin to John and Katherine (Retelstorf) Olson. She went to grade school and high school in Downing. Chris married Eugene Hammer in 1942. After Gene’s death, she met and married Donald Hannack in 1977. Chris worked as a Lab Tech at Sanna Dairies full time while helping on the farm and raising her family. Chris was a member of Christ Lutheran Church, then in 2014 she joined Our Savior’s Lutheran Church with her family on Easter Sunday. She was affectionately known as “Gram” by her family and friends. Chris and Don enjoyed their time spent in Arizona in the winters. You could find her often watching the younger family members at a football game, hockey game, church program, dance recital, etc. She never missed an opportunity to go to a graduation, wedding, or any family event that was being held. She lived at Autumn Village for the past eight years. Chris was the heart and soul of her family. She was a true role model, passing on the love and caring of the Olson family that all her brothers and sisters have shared with the families. Chris is survived by her three daughters, Lynda (Jerry) Cockeram, Sherry (Allen) Otto, and Connie (Dick) Weber. She is also survived by seven grandchildren: Todd (Anita) Cockeram, Troy (Dody) Cockeram, Vicky (Vern) Gothman, Brenda (Dan) Krueger, Steve (Linda) Otto, Scott (Julie) Weber and Lisa Sedlak. She is further survived by 15 great-grandchildren, six great-great-grandchildren and 13 step-grandchildren and great-grandchildren. She also is survived by brothers Simon (Betty) Olson and John (Virginia) Olson; sisters-in-law Vera Olson and Bernadene Olson and many nieces and nephews. She was preceded in death by her husband’s Gene Hammer and Donald Hannack, her parents, brothers Joe and Ken Olson and sisters Norma (Fred) Wyss and Katherine (Loren) Jaeger. A Memorial Service will be held at 11:00 a.m. Tuesday, January 31, 2017 at Our Savior’s Lutheran Church in Menomonie, with Pastor Heather Wigdahl officiating. There will be visitation from 4:00 to 7:00 p.m. Monday, at Olson Funeral Home in Menomonie and at the church one hour prior to the service on Tuesday. Memorials are suggested to Our Savior’s Lutheran Church.

Christine B. Hannack, age 95, of Menomonie, WI passed away on Thursday, January 26, 2017 at the American Lutheran Home. She was born November 3, 1921 in the town of Stanton, Knapp, Wisconsin to John and Katherine (Retelstorf) Olson. She... View Obituary & Service Information

The family of Christine B. Hannack created this Life Tributes page to make it easy to share your memories.

Christine B. Hannack, age 95, of Menomonie, WI passed away on...