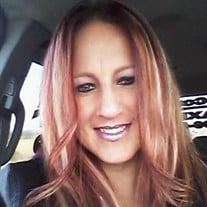 Christine Dianne Hallquist, age 43 of Menomonie, WI “went home to her Heavenly Father” Thursday, March 31st at her home in Menomonie, WI. Christine “Chrissy” Hallquist was born on September 20th in the year of 1972 in Gooding, ID. Chrissy was the daughter of Deborah R. Holland & Fred “Rocky” Carpentier. Christine was also the youngest of three sisters who all live in Idaho. She attended Boise State University with a degree in phlebotomy. Chrissy also worked long term for Direct TV, Pest Control, and later on with the Wells Fargo Corporation. Chrissy had a smile that could brighten anyone’s day! She also had a very infectious laugh that no one could mistake for anyone other than hers. Chrissy grew up loving the Lord and attended “Faith Church & Liberty Christian Center in Menomonie, WI. She believed in Heaven would pray over a dead animal on the roadside. She loved her Dogs “Cash & Xena”, but more than that ”Chrissy” loved Ken Hallquist, who she married on May 30th of 2015. She loved the new family that she gained through her marriage to Ken. Chrissy had some life-long struggles, like her Mother (Deborah), but really did seek out love and attention from her in-laws John & Suzette Hallquist who never judged her or turned their back on her. Chrissy was truly loved by her in-laws, as she loved them just as much in return. Chrissy also had a lot of love in her heart for the step daughters she gained through her marriage to Ken Hallquist who she loved very much Chelsea (26), Brittany (20), & Kendra (7). God has a beautiful angel up in Heaven now and she is in a world without suffering and pain, he took her home to Heaven to be with her other loved ones especially her Mother (Deborah). She will be missed on Earth, but Heaven was her real home and she is smiling down upon us all right now. We are having a “celebration of her life” on Sunday, June 5th at 12:00 P.M. at the Faith Church in Menomonie, WI. Following her service will be a Pot Luck Dinner in her honor to reminisce over our memories of her life as we knew her. The service is open to anyone who wishes to come and pay respects to the one we all call God’s child...

The family of Christine "Chrissy" Diane Hallquist created this Life Tributes page to make it easy to share your memories.