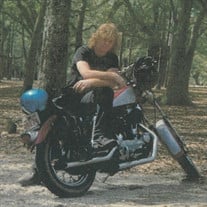 Charles T. Miller Charles “Charlie” Thomas Miller, age 53, of Menomonie, Wisconsin peacefully passed away February 28, 2022 at his home surrounded by family. Charlie was born July 22, 1968 to Elizabeth Webster in Rockford, IL, the eldest of three boys. Throughout his 53 years of life, Charlie lived in many states including: Illinois, Wisconsin, Louisiana, Arizona, and Alaska. On Aug 16, 1989, he married his best friend and soulmate, Lisa Draeger. Together, they had a daughter Ash and a son Tyler. Charlie had undying love for his family and friends. He enjoyed many exciting adventures and hobbies, often involving some (questionably) “reasonable choices”, such as skydiving off hot air balloons and bridges, as well as riding his Harley (at break-neck speed) on the most scenic routes he could find, as far reaching as he could go. He loved to make people laugh to the point of tears, and no matter how hard things got, he never lost his clever, blunt, thoughtful (and sometimes thoughtLESS) lewd humor…. A brilliant oxymoron. He pursued many careers from farming, to carpentry, to counseling, and manufacturing. One of his proudest endeavors was the pursuit of an associate degree for AODA counseling, inspired by an amazing ability to relate and communicate with struggling young people. In part, his success with young people was likely due to forever being young at heart himself! Charlie was constantly inspired and setting his mind to new goals, always driven to making them a reality. His aspirations took him across the country on bucket list adventures, through places like Daytona Florida, Las Vegas Nevada, and the far corners of Arizona. As well as thrilling rides such as “The Road to the Sun” in Glacier National Park in Montana, and “Beartooth Pass” in Wyoming. Charlie lived his life nomadically following thrills, and embracing skydiving, the biker communities, and beyond. Charlie loved anything related to riding his Harley, it was ingrained in his DNA…participating in multiple years of Bike Week Sturgis, South Dakota with Lisa riding two up as navigator. Charlie traveled border to border across the U.S…but thanks to an amazing Make-A-Wish gift to his son Tyler, the entire family embarked on a once in a lifetime trip to Japan. For those who knew Charlie best, he worked hard and played harder his entire life, but always remained a big (but tough) kid at heart. Even as a rare and rapidly progressive neurological condition resulted in a deteriorating body, he never abandoned those sharp-witted remarks and quick humor! Charlie is survived by his beloved wife Lisa (Draeger) Miller, daughter and his “little strawberry”, Ash Miller, Mother Elizabeth Webster, brothers Frank and Andy Miller and uncle Tom Webster. He was also survived by father-in-law Roger Draeger, sister-in-law Terra (Clark) Thaldorf, brother-in-law Tim (daughter Sammy) Draeger, Lisa’s Aunt Susie (Ted) Hoyt, Aunt Carol (Dave) Weber, Uncle Fred (Karmen) Draeger, and many cousins and extended family. Charlie is met with joy and love by their cherished departed son, Tyler Miller (1996-2019). An Open House & Celebration of Charlie’s Life will be held on Monday, March 28th, 2022 from 3:00-7:00p.m. at the Moose Lodge (720 19th Ave E, Menomonie, WI). Cards may be sent to N7639 Cty Road F, Menomonie, WI 54751 or Olson’s Funeral Home & Cremation Services at 615 Wilson Ave. Menomonie, WI 54751 In lieu of flowers, cards are the preferred keepsake. To share a memory, please visit obituaries at www.olsonfuneral.com

The family of Charles T. Miller created this Life Tributes page to make it easy to share your memories.