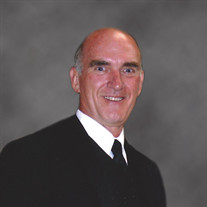 Charles J. “Chuck” Brenner, 75, of Menomonie, passed away on the morning of Saturday, March 30, 2019 at The Neighbors of Dunn County in Menomonie following a prolonged battle with cancer. He was born April 15, 1943 in East Orange, New Jersey to Carl Julius and Louise Hazard Brenner. He graduated from Columbia High School in Maplewood, NJ where he learned a love of amateur radio that continued through his life. He went on to receive a bachelor’s degree from Stout State College in Menomonie and Master’s and Doctoral degrees from the University of Missouri in Columbia, all in Industrial Education. Chuck married Susan Guntner in 1973 in Menomonie and together they had two sons, Jacob and Noah. Following graduation, Chuck worked briefly at Stout before joining the computer science faculty at UW River Falls and later UW Eau Claire, where he worked for many years before retiring in 2000. After retirement, Chuck and Susan spent winters walking the beach near their home in New Smyrna Beach, FL and summers in Menomonie gardening, doing projects around the house and traveling the country in their motorhome. Chuck is survived by his wife Susan G. Brenner of Menomonie; sons Jacob (Rebecca) Brenner of Ithaca, NY and Noah (Kathy Bolger) Brenner of Houston, TX and grandchildren Morgan, Zachary and Sally Brenner of Ithaca and brothers Christopher Brenner of Grayslake, IL and Paul (Sue) Brenner of Evanston, IL. He was preceded in death by his parents. Arrangements are being handled by Olson Funeral Home. A celebration of Chuck’s life is planned at Our Savior’s Lutheran Church on Saturday, May 4, where Chuck was a long-time member. Visitation will begin at 10 am with a service at 11 am, followed by a reception. He will be interred at Evergreen Cemetery. In lieu of flowers, the family would prefer a donation in Chuck’s name to the Stout University Foundation or the food pantry program at Stepping Stones of Dunn County, where he volunteered his time.

The family of Charles J. Brenner II created this Life Tributes page to make it easy to share your memories.