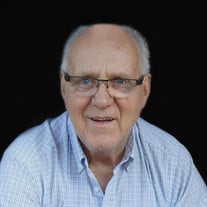 Charles Robert Bahr, 81, of Menomonie, Wisconsin (formerly of Platteville, Wisconsin), passed away Wednesday, December 5, at Grace Woodlands care facility surrounded by his family. Charles was born October 7, 1937 in Mason City, Iowa to Elmer and Blanche Bahr, the oldest of five children. Charles served in the U.S. Air Forces as an air traffic controller and was a proud veteran of the Korean War. After receiving his honorable discharge from the service, he worked for the U.S. Postal Service as a mail carrier in Roseville, Minnesota, where he met his beautiful bride and wife of 51 years, Rinda Lee Davis. The two were married on November 24, 1967. In 1972, Charles began his career with Wisconsin Power & Light (later Alliant Energy), which took him to Portage, Wisconsin, and then in 1977, to Platteville, Wisconsin, his home of 37 years. He filled many roles during his career, working finally as a dispatcher until his retirement in 1999. Outside of work, Charles greatest joy was spending time with his family – particularly his grandchildren. He was also an avid sports fan, with lifelong dedication to the Minnesota Vikings, and steadfast support of the UW Badgers. Charles is survived by his wife, Rinda; two sons, Torrey Bahr and his wife Jenny of Ankeny, IA, and Russell Bahr and his wife Sara of Menomonie, WI; four grandchildren, Kyrie, Ashten, Ayden, and Graysen; a brother Greg Bahr and his wife Deena; along with many nieces and nephews. He was preceded in death by his parents, Elmer and Blanche, his brothers Richard and Jerry, and sister Jackie. A celebration of life gathering will be held from 4:00 to 8:00 p.m. Friday, December 14, 2018 at Olson Funeral Home & Cremation, 615 Wilson Ave, Menomonie, WI, 54751.

The family of Charles R. Bahr created this Life Tributes page to make it easy to share your memories.