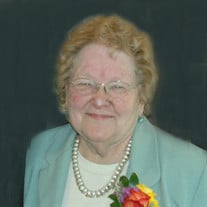 Carol “Lorraine” Olson, 94, of Menomonie passed away on Saturday, March 3, 2018, at Our House Assisted Living. She was born on April 29, 1923, in Minneapolis, Minn., to A. Bernhard and Inez (Vieburg) Larson. She graduated high school, 1941, in South Dakota. She then attended General Beadle State College. She taught multi-grades in a rural South Dakota, one room schoolhouse, heated by a wood burning stove. In 1944 she moved back to Minnesota. She earned a BS in Education from the University of Minnesota in 1947, always willing to sing the school rouser years later. Following college, she was thrilled to take the train west with three other teachers to teach school in Ontario, Calif. On vacation back in Minneapolis she met soon-to-be pastor Arnold Olson. In less than a year, they were married on Nov. 10, 1948, and lived in Minnesota while Arnold attended the seminary. Arnold was also superintendent of the Fergus Falls Children’s Home where Lorraine was drafted as cook and was known as “everybody’s mother”. After ordination, they had churches in Wisconsin and South Dakota, settling in Menomonie at Christ Lutheran in 1958. They enjoyed 50 years together, raising three sons, a collie named Champ, camping in S.D., and traveling to many parts of the world. Lorraine loved reading, sewing, and chocolate. In 1965 she achieved a master’s degree in Guidance and Counseling from UW Stout. Lorraine is survived by sons, David (Kathleen) Olson (Red Wing, MN), Paul (Vienette) Olson (White Bear Lake, MN), Daniel (Debra) Olson (Menomonie, WI); grandchildren, Neil Olson(FL), Kristoffer (Erinn Liebhard) Olson (MN), Beth Olson(WI), Heather Olson (MN), Adam Olson (MN), Ashley Olson (MN), Angelica Erickson (MN); great grandson, Palmer Olson; sister, Marion Harris; and many nieces and nephews. Lorraine was preceded in death by her husband Rev. Arnold Olson; parents, A. Bernhard and Inez Larson; daughter-in-law, Kathy (Marson) Olson; sister, Marjorie Rees; grandson-in-law, Garrett Olson. Funeral Services will be held 11 a.m. Friday, March 9, 2018 at Olson Funeral Home in Menomonie with Pastor Kathleen Remund officiating. Burial will be at Christ Lutheran Halvorson Cemetery in Menomonie. Visitation will be one hour prior to the services. Many thanks for all the care given by the staff at Our House in Menomonie and Heartland Hospice.

The family of Carol "Lorraine" Olson created this Life Tributes page to make it easy to share your memories.

Carol “Lorraine” Olson, 94, of Menomonie passed away on Saturday,...