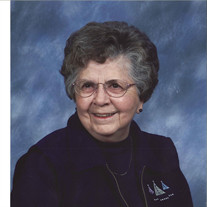 Carol A. Egan, age 89, of Menomonie, WI passed away Friday, August 5, 2016 at The Neighbors of Dunn County in Menomonie. She was born Oct. 4, 1926 in Rice Lake, WI to Lawrence and Minnie (Raawe) Robarge. Carol graduated from Rice Lake High School in 1943. After graduation, during W.W. II , she worked at the Rationing Office in Rice Lake. Following the war she worked at First National Bank in Rice Lake. On Nov. 25, 1948, Carol married Harry W. Egan of Rice Lake at First Lutheran Church in Rice Lake. After their marriage they lived in Ridgeland until moving to Menomonie in 1957. From 1967 to 1988 Carol worked at Bank of Menomonie, now known as Bremer Bank. Carol was a member of Our Savior’s Lutheran Church in Menomonie and was involved in the women’s activities. She was also a volunteer with the Red Cedar Medical Center. Carol is survived by a son, Rod (Beth) of Boalsburg, PA; a daughter Jean (Tom) McBurney of Burlington, WI; six granddaughters, Laura Egan, Megan Egan, Molly McBurney, Katy (Ted) Knudtson, Becky (Mark) Rosenow and Annie McBurney; a great-grandson Rory; as well as other relatives and friends. She was preceded in death by her husband Harry; her parents; a sister Agnes and three brothers, Walter, Harold and Ernest. A Memorial Service will be held at 11:00 a.m. Tuesday, Aug. 9, 2016 at Our Savior’s Lutheran Church in Menomonie with Pastor Sarah Miller officiating. There will be visitation at the church one hour prior to the service on Tuesday. Burial will be in Evergreen Cemetery in Menomonie. Memorials may be given to Our Savior's Lutheran Church or a charity of choice.

The family of Carol Ann Egan created this Life Tributes page to make it easy to share your memories.