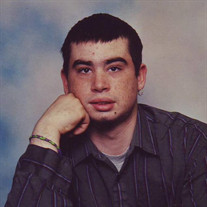 Bryan John Heitkamp, age 27, of Menomonie, WI passed away unexpectedly, on Saturday, Nov. 7, 2015 at Mayo Clinic Health System in Eau Claire. He was born Sept. 12, 1988 in Grand Forks, ND to Jeffrey and Patricia (Roberts) Heitkamp. At the age of 3 ½ he moved with his family to Menomonie where he attended Pre – K at St. Paul’s Lutheran School and Oak Lawn Elementary School. Bryan graduated from Menomonie High School in 2007 and then graduated from CVTC – Small Engine Class. Bryan loved spending time with his daughters and enjoyed people in general. He also enjoyed playing video games, fishing, doing mechanical work, traveling, driving tractors, trucks, and especially the red ’57 Chevy, playing guitar and everything related to music. He worked at various places including; McDonalds as his first job, then Henderson Excavating, Andersen Windows, CEVA Logistics, Lentz Fertilizer and Badger Iron. Bryan is survived by his daughters, Elizabetha (age 4) and Annabelle (age 2); his parents, Jeff and Patricia; his brother, Brandon (Alicia McVinnie); and their children Abigail and Arianna; an aunt, Kris (Phil) Martin; cousin, Jeremy (Mirranda) Green and their children, Lily and Matt; as well as other relatives and friends. He was preceded in death by his paternal grandparents, Fred and Marion Heitkamp and maternal grandparents, John Roberts and Aretha Parker; and his brother, Jeffrey Heitkamp Jr. Funeral services will be held at 11:00 a.m. Thursday, Nov. 12, 2015 at Tainter United Methodist Church in the Town of Tainter, Dunn Co. WI with Pastor Craig Conklin officiating. There will be visitation from 4:00 to 7:00 p.m. Wednesday at Olson Funeral Home in Menomonie and at the church one hour prior to the service on Thursday. Burial will be in Cedar Falls Cemetery at a later date.

The family of Bryan J Heitkamp created this Life Tributes page to make it easy to share your memories.