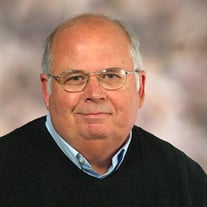 Bruce Francis Pamperin age 64 passed away on February 25th 2015 at Mayo Clinic Health System of Eau Claire surrounded by his family. Bruce was born on October 7th, 1950 to Mary Grace (Scanlon) and Lawrence Pamperin in Green Bay, WI. He grew up in Green Bay attending Catholic schools, St. Agnes Elementary and Premontre High School. He graduated from UW- Stevens Point with a Bachelor’s degree in sociology. He received his Masters of Science in Social Work and PhD in Adult Education from UW-Madison. Bruce was a professor at UW-Stout from 1983-2012 where he taught courses in social science and social work. His course on Hmong Culture was the first of its kind in the United States. He had a deep and long term interest in the Hmong Culture. He traveled many times to Laos, Thailand, China and Vietnam to better understand their culture and contributions the Hmong population provided to the US Government during the Vietnam War. He served on the selection board for the Hmong Studies Electronic Journal. He presented numerous papers at Concordia College Hmong Conferences. During his professional career he received numerous recognition of his service. Specifically in 1999 he received the Dahlgren Professor Chair Award from the Wisconsin Board of Regents at UW Stout and the second in 2007 he was presented with the “Outstanding Faculty” Award from Multicultural Student Services at UW Stout. He served on the Children’s Trust Fund Board for many years having been appointed originally by then governor Tommy Thompson and served as President of the Board which was committed to child abuse prevention. In his early professional career he was committed to serving families in Dodge County working in child protection services. Later his career he provided mental health services to Lutheran Social Services, First Things First and notably the Lac Coure Oreilles Band of Lake Superior Chippewa Indians. Bruce was dedicated to his family and wife and will be sadly missed by his wife, Ursula Berger, children Sarah (Dan Lovell) of Washington, DC Andrew (Katie Bickel) of Madison, WI and Seth (Adrian Baule) of Philadelphia, PA. He is survived by brothers, Lawrence (Vi) of Green Bay, WI, Thomas (Lynette) of Clifton, VA with children Melissa, Nick, Eric and sister in law Pauline of Snohomish, WA with children Jocelyn and Michael. He will be missed by his sister in law Christa Sokolenko of Watertown, WI with children David, Deborah, Joyce, James, brother in law Fred (Rosemary) Berger, Erika, Karl, and brother in law Hans (Kathy) Berger of Beaver Dam, WI. Bruce was preceded in death by his parents and two brothers, Robert and Dennis. He was a member of St. Joseph Catholic Church of Menomonie. As a friend of Bill W, he grew to understand his disease, through which he appreciated a deeper level of community and his closeness to God. Bruce would like to thank all his doctors, nurses, specialists, medical staff and volunteers in the Mayo Health Communities of Menomonie, WI, Eau Claire, WI, Rochester, MN and Jacksonville, FL who treated him with dignity and compassion. In memory of Bruce, please make a donation to a charity of your choice. A Celebration of Life service will be held at 10:30 a.m. on Monday, March 2nd at St. Joseph Catholic Church in Menomonie WI, with Father John Mano officiating. There will be visitation from 4:00 to 7:00 p.m. Sunday at Olson Funeral Home in Menomonie and also one hour prior to the service on Monday. Interment will be in Lowell Cemetery, in Lowell, WI at a later date.

The family of Bruce F. Pamperin created this Life Tributes page to make it easy to share your memories.