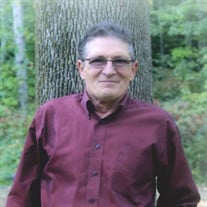 Brian W. Kohnke passed away peacefully surrounded by his family Friday July 23, 2021 at the age of 60. Brian was born April 28, 1961 in Eau Claire WI to Elmer and Phyllis (Schutts) Kohnke. He grew up on his family farm in rural Menomonie and graduated from Menomonie High School in 1979. After high school he adventured to California and later returned back to Menomonie. Brian married the love of his life Jodi Froeschle on October 5, 1996 at Tainter United Methodist Church. From there they built a life they loved with their three children. Brian and Jodi (George and Fred) were each other’s best friends, that shared 25 years of marriage. Brian learned the electrical trade from and worked for his father-in-law (Jim) at J&J Electric, and later for Quilling Electric. Most recently he worked for NAPA delivering parts. Brian’s greatest joy was his grand-monsters, he was especially happy and fought very hard to have the chance to meet his newest granddaughter (Briella). Brian enjoyed many things, hunting, fishing, golfing, Friday night races at the Red Cedar Speedway, Brian served on the racetrack board as a member for many years. He was an avid Green Bay Packers fan, but mostly he enjoyed being with his family and friends. Brian would not want you to cry for his loss, but treasure each happy memory spent together and live each day to the fullest as he did, and “go catch that next fish” or “toast that next beer!” Brian is survived by his wife Jodi of Menomonie, one daughter Brianna (Sam) Boody of St. Cloud, two sons Cody (Ashley) Falkner of Colfax, Tony (Liz) Falkner of Menomonie, multiple grand-monsters Jackson, Treyson, Rylen, Mya, Onnaleigha, Tarrin, and Briella; brother Bruce (Sue) Kohnke of Colfax, nephew Josh (Jen) Kohnke of Menomonie, niece Jessica (Brian) Bondhus of Dassel, mother-in-law Marge Hotter of Menomonie, father-in-law Jim (Suzie) Froeschle of Menomonie, brother-in-law Jon Williams of Menomonie, brother-in-law Jeff (Mary) Hotter of Menomonie. Along with many other relatives and friends. He was preceded in death by his parents, Elmer and Phyllis Kohnke, God parents Marlis and Malcom Shaw, father-in-law Joseph Hotter, and very close friends Wendy Weber, Lonnie Maves, and Tyler Mathews. A special thank you to MCHS, Dr Rich, EMS, Palliative and Hospice Care. Memorial Services will be held at 1:00 p.m. Monday, August 2, 2021 at Olson Funeral Home in Menomonie with Pastor Kyle Gunderson officiating. There will be a visitation on Sunday August 1, 2021 from 3:00-7:00 p.m. and also one hour prior to the service all at the funeral home. Following the funeral service there will be a gathering at the home of Brian and Jodi Kohnke.

Brian W. Kohnke passed away peacefully surrounded by his family Friday July 23, 2021 at the age of 60. Brian was born April 28, 1961 in Eau Claire WI to Elmer and Phyllis (Schutts) Kohnke. He grew up on his family farm in rural Menomonie... View Obituary & Service Information

The family of Brian W. Kohnke created this Life Tributes page to make it easy to share your memories.

Brian W. Kohnke passed away peacefully surrounded by his family...