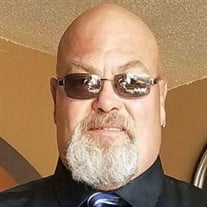 Brian D. Aasen, age 50 of New Auburn, passed away unexpectedly Saturday, December 15, 2018 at his home. Brian was born December 10, 1968 to Terry and Lois (Hoff) Aasen in St. Paul, MN. He graduated from Colfax High School in 1987. He served in the Army and fought during Desert Storm. He lived for his Harley, the Packers and Badgers, along with hunting and being outdoors. Most importantly, spending time with his grandkids. He was a proud Papa. He will be remembered for his loud, contagious laugh and was always an honest, straight forward guy who spoke whatever was on his mind. Brian is survived by his wife Dawn, son Terry (Allie) Aasen, daughter Abbie Aasen, grandchildren Breyson and Mina, step-children Amanda Sokup (Steve Connell), Nicholas Sokup, Mitchell Sokup, Maria Sokup (Dale Camen), Dannah Sokup; mother Lois Aasen, brother Brad (Jewel) Aasen, sister Robin (Ron) Hoffman. He is further survived by many nieces, nephews, other relatives and friends. He was preceded in death his father Terry, son Steven, grandsons’ Bentley and Blake. Funeral Services will be held at 11:00 a.m. Thursday, December 20, 2018 at New Hope Lutheran Church in Sand Creek with Pastor Michael Sparby officiating. Military Honors by the Russell-Toycen American Legion Post 131 of Colfax. There will be a visitation from 4:00 to 7:00 p.m. Wednesday at Olson Funeral Home in Menomonie and also one hour prior to the services at the church on Thursday. Burial will take place at a later date at Our Savior’s Lutheran Cemetery, Twp. Of Sand Creek, Dunn County.

The family of Brian D. Aasen created this Life Tributes page to make it easy to share your memories.