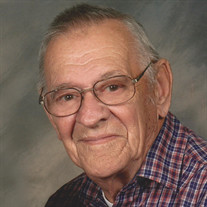 Billy Freemont Kuhn, age 91, formerly of Knapp, WI, passed away on Sunday, March 18, 2018, at The Neighbors of Dunn County in Menomonie, WI. Bill was born on August 9, 1926, in Knapp, WI, to Murville and Mildred (James) Kuhn, and grew up on the family farm just outside of Knapp. He graduated from Menomonie High School in 1944 and proudly served in the U.S. Army from February 11, 1945, to his honorable discharge on November 28, 1946. He was honored to be a driver for General MacArthur in the Philippines during WWII and was a current member of The American Legion Post 330 in Wilson, WI. On June 25, 1955, Bill married Mae Keck in Menomonie where they lived until moving to Knapp in 1961. They celebrated nearly 62 years of marriage at time of her death on June 5, 2017. Bill worked at the Uniroyal tire plant in Eau Claire, WI, for 35 years retiring as an inspector in 1982. He enjoyed 36 years of retirement! After retirement, Bill worked at the wastewater plant in Menomonie for several summers. He and Mae were members of the Knapp United Methodist Church. After retiring, Bill served as custodian at the church and was also the cemetery sexton of Forest Hill Cemetery located just east of Knapp. Mae had a passion for music and was a member of the Senior Jammers band. For several years, Bill transported the band members and their instruments to their “gigs” in his van and was the band’s set-up and tear-down guy! He and Mae enjoyed camping for many years and watching the Milwaukee Brewers. Bill was a family man who would do anything for anyone. He took pleasure in keeping the snow in Knapp off the neighbors’ sidewalks or driving those who could no longer drive to their medical appointments or to get groceries. Bill is survived by his children: Geoffrey (Linda) Kuhn of Brown Deer, WI; Kathi (Tim) Lehmann of Menomonie, WI; Mary (John) Trygstad of Eagan, MN; Robert (Linda) Kuhn of Wilson, WI; 10 grandchildren: Brian (Elia) Kuhn, David (Tennelle Anderson) Kuhn, Elizabeth Kuhn Brubaker (Michael Brubaker), Katie (Travis Wright) Kuhn, Heather (Joe) Witts, Lindsay (Rick) Reiten, Matt (Beth) Meierstein, Cole (Carly) Meierstein, Carissa (Frank) Gruber, Jonathon (Melissa) Kuhn; 15 great-grandchildren; sister, Mary Lou Hotchkiss of Menomonie, WI; brothers, Jim (Jean) Kuhn of Waverly, MN; and Michael (Shirley) Kuhn of Knapp, WI. Bill is further survived by nieces, nephews, and other relatives and friends. He was preceded in death by his parents; his wife; brother, Jack (Lucy) Kuhn; granddaughter, Carrie Lehmann; brother-in-law, Nick Hotchkiss; and sister-in-law, Frances (Dale) Scott. Bill's family will forever be grateful to all the staff at The Neighbors of Dunn County-Inglenook Terrace for their compassionate care for the nearly two years he resided there and to Missy, Pat, Gina, Craig, and Lynn from St. Croix Hospice who greatly enhanced his final month of life. A celebration of life service will be held at 2:00 p.m. on Wednesday, April 11, 2018, at Knapp United Methodist Church with Pastor Tim Vettrus officiating. There will be visitation two hours prior to the service at the church. Burial will take place at Forest Hill Cemetery, Township of Stanton, Dunn County and a dinner will be served at the Knapp Community Hall following the service. Memorials are preferred to the Knapp United Methodist Church. Olson Funeral Home in Menomonie is serving the family.

Billy Freemont Kuhn, age 91, formerly of Knapp, WI, passed away on Sunday, March 18, 2018, at The Neighbors of Dunn County in Menomonie, WI. Bill was born on August 9, 1926, in Knapp, WI, to Murville and Mildred (James) Kuhn, and grew up on... View Obituary & Service Information

The family of Billy F. Kuhn created this Life Tributes page to make it easy to share your memories.