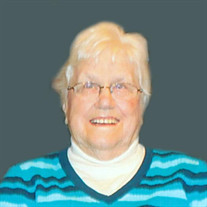 Beverly Jane Schauer, age 83, of Colfax, passed away on Thursday, September 14, 2017 at Colfax Health and Rehabilitation Center. Bev was born on March 24, 1934 to Otto and Dorothea (Windler) Sell. She attended grade school at Beyer Settlement and graduated from Colfax High School in 1951. On March 25, 1952, Bev married Arvin Schauer. For most of their marriage, they farmed in the township of Red Cedar. Bev was very involved in her church. She was the organist for St. Katherine’s Church for many years. Bev played organ most of her life, playing for several weddings and funerals over the years. She was the treasurer of the Township of Red Cedar for 19 years and served for almost 20 years as the Village of Colfax Trustee. Bev enjoyed cooking and baking, as well as sewing, quilting, and making crafts. She loved spending time with her family, especially her great grandchildren. Bev is survived by two sons, Darrell (Linda) of Colfax, Dan (Cindy) of Menomonie; grandchildren, Stacey Schauer Hazuga of Menomonie, Trevor (Gwen) Schauer of Menomonie, Tony (Lisa) Schauer of Hudson, Andrea (Ben) Anderson of Colfax, Matt (Amy) Schauer of Colfax, 10 great grandchildren, 2 special nieces; Lanna (Ray) Linberg and Marie Berenschot. She was preceded in death by her parents Otto and Dorothea Sell, husband Arvin, sister Florence Aspen and grandson Jason Schauer. Memorial service will be held at 11:00am, Saturday, September 23, 2017 at St. Katherine’s Church (Beyer Settlement) with Pastor Shawn Kauffeld officiating. There will be a visitation from 9:00am to 11:00am at St. Katherine’s, before the service. Burial will take place at Evergreen Cemetery in Colfax, Wisconsin. Olson Funeral Home of Menomonie is serving the family.

The family of Beverly Jane Schauer created this Life Tributes page to make it easy to share your memories.

Beverly Jane Schauer, age 83, of Colfax, passed away on Thursday,...