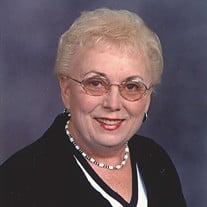 Beverly (Bev) M. Kilde, age 80, of Menomonie, WI passed away Sunday, September 8, 2019 at Mayo Clinic Health System in Eau Claire, WI. She was born December 10, 1938 in Chippewa Falls to Leonard L. Bollom and Wilhelmina “Billie” (Visser). She graduated from Chippewa Falls Senior High School in 1956. Following high school, Bev attended Minnesota Bible College in Minneapolis, MN for one year before getting married. Beverly married Duane Sanford Kilde August 30, 1957 in Chippewa Falls, WI. While remaining in Eau Claire she gave birth to their son Scott Duane (April 1961) and later after moving to St. Paul, MN their daughter Kimberly Marie (April, 1964). The family lived in the greater St. Paul area for over 30 years with Bev working as a secretary for a number of construction related companies in the area. Her passion was bowling and serving for 40 years as the league secretary. In 1991 Duane and Beverly moved to Menomonie, WI to enjoy the waters of Lake Tainter and the fellowship of Tainter Methodist Church. She continued to commute to the Cities to support G. Vimr Contracting until 2010. As a member of the Missions board of the church Bev had a gift for helping others – both near and far. She was the founding giver for a food drive in Africa that was later to develop into Imani Yako; a humanitarian outreach to the poor of Kenya. She had the most creative way to give unto others, her special messages of love, hope, and concern through the crafting of custom cards for the church, family, and friends which she did for over 20 years. Beverly is survived by her husband Duane Kilde of Menomonie, WI; son Scott and daughter-in-law Josephine of Eau Claire, WI and Ogata Rongia, Kenya; daughter Kim Kilde and son-in-law Jeff Kotula of Eden Prairie, MN; her grandchildren Jennifer Kilde and Shaun Kilde. She is also survived by two sisters, Darlene (John) Read of Indianapolis, IN and Barbara (Gerald) Wucherpfennig of Chippewa Falls, WI as well as nieces, nephews, other relatives and friends. She was preceded in death by her parents; a grandchild Jesse Kilde; and her brother David Bollom. Funeral services will be held at 11:00 a.m. Saturday, Sept. 14, 2019 at Tainter United Methodist Church in the Town of Tainter, Dunn Co. WI with Pastor Craig Conklin officiating. There will be visitation from 4:00 to 7:00 p.m. Friday at Olson Funeral Home in Menomonie and at the church one hour prior to the service on Saturday. Burial will be in the church cemetery.

The family of Beverly M. Kilde created this Life Tributes page to make it easy to share your memories.