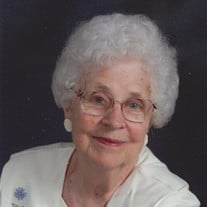 Betty Mae (Schultz) Michelbook, age 91, of Menomonie passed away on Sunday, April 1, 2018 at the American Lutheran Home. Betty was born September 26, 1926, in Menomonie to Elmer and Millie (Behling) Schultz. She attended Coddington Grade School, and Menomonie Junior and Senior High Schools. She played trombone in the high school band. Following graduation from high school in 1944, she began working at Badger State and from there was hired at United Building Center. In 1946 Betty married Marcus “Mike” Gugel. Mike died in 1966. On June 3, 1972, Betty married Lawrence Michelbook. She retired in 1988 after working 45 years at the lumber companies. Betty and Lawrence spent eleven winters in Lakeland, Florida, moving back to Menomonie permanently in December 1999. Betty and Lawrence enjoyed traveling; including trips to Hawaii, Colorado, Georgia, the Ozarks, and Branson. Betty was a lifelong member of Peace Lutheran Church. She was baptized, confirmed and married twice there. She sang in the church choir in her younger years. Betty is survived by her nephews and nieces, Ron (Jan) Jordan, and JoAnn Wegenke of Menomonie, Wisconsin; Carol Jordan of Altoona, Wisconsin; and Glenn (Rhonda) Jordan of Phoenix, Arizona. She was preceded in death by her husband, Lawrence, in 2013; her parents; brother Valgene (in World War II); first husband Mike Gugel; brother-in-law Maurice Michelbook; sister-in-law Ruth Jordan; and nephews Bert Jordan and Warren Wegenke. The family would like to express their gratitude to the staff and caregivers of Comforts of Home Assisted Living in Menomonie for their great care given to Betty for almost seven years; and, to the staff at the American Lutheran Home, the care team from St. Croix Hospice, and Dr. Carrie Nelson for their dedication and compassion for Betty during her final days. In lieu of flowers, please consider a memorial donation in honor of Betty to Peace Lutheran Church or a charity of your choice. Funeral Services will be held at 12:00 (noon) on Wednesday, April 4, 2018 at Peace Lutheran Church in Menomonie with Pastor David Whelan officiating. There will be visitation at the church from 11:00 a.m. until the time of the service on Wednesday. Burial will be in Peace Lutheran Cemetery in the Town of Menomonie, Dunn County, Wisconsin. Olson Funeral Home in Menomonie is serving the family.

The family of Betty M. Michelbook created this Life Tributes page to make it easy to share your memories.