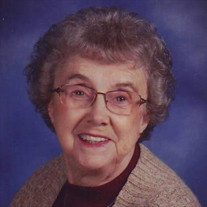 Berdena Lois Weber, 85 of Menomonie went home to be with the Lord on Friday, June 10, 2016 at the American Lutheran Home in Menomonie. She was born January 13, 1931 at the family farm in Eau Galle, daughter of George and Alice (Coulson) Weinzirl. She attended Eau Galle grade school and graduated from Durand High school in 1949. Berdena worked at Plum City Hospital, Durand Federated Store and Hoeser’s Drugstore before getting married to Leon Weber on April 18, 1951. They celebrated their 60th wedding anniversary. Together they farmed for 30 years fueled by Berdena’s love to farm (taking after her father, George Weinzirl). She was an excellent gardener (sold raspberries) and shared her green thumb of flowers with others. Berdena could bake bread, pies, cookies and chocolate cake with the best of them, along with being a 4-H sewing leader. She was her children’s best cheerleader at their high school sports and 4-H activities. They sold the farm in 1980 and moved to Menomonie where she worked at Sana Dairies (Con Agra) for 17 years. Berdena enjoyed serving at St. Paul’s Lutheran Ladies Aid, keeping the church shrubs and flowers manicured, along with working at the Election Day polls until age 82. Leon and Berdena loved fishing on Bass and Big Sand Lakes near Spooner and spending New Year’s Eve with their friends of 60+ years. Berdena is survived by her three children, Jody (Mike) Christenson of MN; Greg (Paulynn) Weber of Milwaukee; and Jean (Reid) Rehbein of MN; Nine grandchildren, Matthew (Julie), Katie, Emilie (William) Mason, Sabrina, and Samantha Weber; Vanessa (Nate) Christenson Herman; Andrew (Jen), Jessica and Erick Bloom; four “great”-grandchildren, Aubrie, Ashton and Aria Herman and Madeleine Mason. And her brother-in-law, Ralph Dudley of Centertown, MO. Also survived by nieces, nephews and other relatives and friends. She was preceded in death by her husband, Leon; parents George and Alice Weinzirl; brothers, Lloyd (Donna) and Charles (Won) Weinzirl; an infant sister, Dorothy Mae; and a sister-in-law, Carol Jean Dudley. Funeral services will be held at 11:00 a.m. Tuesday, June 14, 2016 at St. Paul’s Evangelical Lutheran Church in Menomonie, with Pastor Brett Voigt officiating. There will be visitation from 9:00 to 11:00 a.m. at the church on Tuesday. Burial will be in Weber Valley Cemetery in the Town of Eau Galle, Dunn Co. WI. Olson Funeral Home in Menomonie is serving the family. In lieu of flowers the family suggests memorials to Weber Valley Cemetery.

Berdena Lois Weber, 85 of Menomonie went home to be with the Lord on Friday, June 10, 2016 at the American Lutheran Home in Menomonie. She was born January 13, 1931 at the family farm in Eau Galle, daughter of George and Alice (Coulson) Weinzirl.... View Obituary & Service Information

The family of Berdena L. Weber created this Life Tributes page to make it easy to share your memories.

Berdena Lois Weber, 85 of Menomonie went home to be with the...