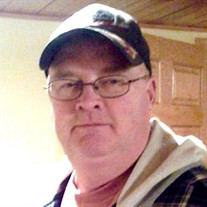 Barry Grant Hoag, age 58, passed away on Sunday, November 19, 2017 at The Neighbors of Dunn County, Menomonie, Wisconsin with his sister Becky at his side. Prior to his transition his loving and supportive parents, children, and sisters sat in sacred space with him. Barry was born on February 16, 1959. He was the firstborn child of Garry and Sally (Kostman) Hoag-followed by four, loving sisters. Barry grew up on the family farm located east of Boyceville. He had a fun filled and active childhood. He loved his Ma’s cooking and especially her chocolate chip cookies. He could always be seen, in the barn, working right alongside his Ma. Barry played high school basketball and enjoyed shop class. He was baptized and confirmed at Our Savior’s Lutheran Church, Wheeler. He graduated from Boyceville High School in 1977. After graduation he joined the United States Army. On October 8, 1977, Barry was united in marriage to Peggy O’Connell at Our Savior’s Lutheran Church, Wheeler. Although they later divorced, their marriage was blessed with a son and a daughter. Following his military service Barry worked with his parents on the family farm. He was passionate about putting in and harvesting crops. When the family farm was sold, he went to work for Fleet Farm driving fork lift and assisting customers in the lumber yard. He thoroughly enjoyed his job at Fleet Farm until he started having health challenges in 2014. Barry enjoyed life and family holiday celebrations and get togethers. He attended almost every BHS sporting event. Barry enjoyed tractor pulls, county fairs, going to the casino with his parents and trying his luck on the penny slots. As a young boy he learned the joys of people watching and drives in the country from his Grandpa Willard, and he continued to enjoy these as an adult. He was honored to be the Godfather for his Niece Tanya (Harnisch) Javner, and he was very proud of being a Grandpa. He will always be remembered, by those who knew him, as a soft spoken, kind hearted, caring and gentle man. Barry is survived by his: Parents, Garry and Sally (Kostman) Hoag; ex-wife, Peggy Carlson; Son, Jon (Andrea Larson) Hoag; Step Granddaughters, Taylor and Kady Grambow; Grandson, Brody Hoag; Granddaughter, Gracyn Hoag-all of Boyceville; Daughter, Jessica Hoag; Grandson, Riley Hoag and Granddaughter, Lauren Hoag—all of Osceola, WI. He is also survived by his four sisters: Brenda (Kenneth) Halvorson, Bonnie (Jeff) Hoff, Beverly (Brian) Biggart, and Becky (Tim) Fasbender-all of Boyceville. He is further survived by ten nieces and nephews: Amanda (Eric) Rydel, Brittany Halvorson, Jeremy (Dana) Hoff, Joshua (Kathryn) Hoff, Brent (Tara) Hoff, Nicole (Chad) Herman, Dustin (Kim Nusberger) Biggart, Sabrina (John) Keesling, Tanya (Cody) Javner, Alec Schaffer, Step Niece, RaeAnna Fasbender and Step Nephew, Brady Fasbender; Uncles David (Marie) Kostman and Jerry (Barb) Kostman; Aunts Vivian Barton, Jackie Hoage, Eileen (Robert) Folk, and Sharon (Steve Friede) Smith; Great Nieces and Nephews, Many Cousins and Friends. Barry was preceded in death by his: Grandparents Willard and Mabel (Hendrikson) Hoage and Harley and Leona (Schoenoff) Kostman; Uncles, Robert Hoage and Jim Kostman; Aunt, Sylvia (Kostman) Burns; Nieces, Tabitha Harnisch and Kia Schaffer; and Cousin, Paul Hoage. The family extends it’s gratitude to Olson Funeral Home and Cremation Service and the medical professionals of the Mayo Health System, Mayo Hospice and The Neighbors of Dunn County for their compassionate care for Barry and his family. A visitation will be held at Olson Funeral Home, Menomonie, WI from 4-7 pm on Sunday, November 26th. Barry’s Memorial Service will be at Our Savior’s Lutheran Church, Wheeler, WI on Monday, November 27th at 11:00 am. The family will greet visitors from 10-11 am prior to the service. Interment will follow the service at Our Savior’s Lutheran Cemetery, Wheeler, with military honors by American Legion Post 314 - Harmon Harris. All are invited to join the family for a lunch at the church.

Barry Grant Hoag, age 58, passed away on Sunday, November 19, 2017 at The Neighbors of Dunn County, Menomonie, Wisconsin with his sister Becky at his side. Prior to his transition his loving and supportive parents, children, and sisters sat... View Obituary & Service Information

The family of Barry G. Hoag created this Life Tributes page to make it easy to share your memories.