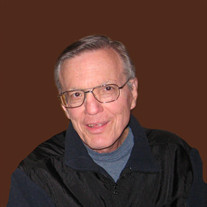 Barry C. Bloom, age 75, of Menomonie, WI passed away Tuesday, Dec. 19, 2017 at Mayo Clinic Health System – Red Cedar, after a 20 year struggle with Parkinson’s. He was born Nov. 2, 1942 in Belle Fourche, SD to Clifford Donald and Pauline (Rittgers) Bloom. He also lived in Spencer and Denison Iowa before the family moved to Brainerd, MN when Barry was in the fourth grade. Barry graduated in 1960 from Brainerd High School where he participated in golf and wrestling. In 1965, he graduated from Gustavus Adolphus College with a degree in Secondary Education. He taught two years in Badger, MN and then spent the rest of his teaching career at Durand High School. He taught Business Education and Drivers Education classes and also coached Wrestling. He retired from Durand High School in 2000 after 33 years. On Jan. 5, 1974, Barry married Julie Rosenthal at Central Lutheran Church in Mondovi, WI. Barry was truly a family man. His kids and grandkids always came first. He was very proud of his sons, Jake and Ben. He adored his grandchildren and enjoyed spending time with them even though he couldn’t always do everything he wanted to with them. He will be sadly missed. Barry is survived by Julie, his wife of 43 years; sons, Jacob (Stacy) Bloom and Benjamin (Heidi) Bloom; and by grandchildren, Maxwell and Gracie Bloom. He is also survived a brother, Dr. Robert (Lynn) Bloom of Vadnais Heights, MN; brother-in-law Allen Rosenthal; sister and brother-in-law Dale and Mary Larson; nephews, Cliff (Colleen) Bloom, Corey (Wendy) Bloom, Troy (Kris) Rosenthal, Ross (Melissa) Christopherson and Chris Pratt; nieces, Lori Hocum and Jenny Pratt; as well as other family and friends. He was preceded in death by his parents, Cliff and Pauline Bloom; brother-in-law David Rosenthal; and father and mother-in-law, Henry and Ione Rosenthal. A Memorial Service will be held at 11:00 a.m. Saturday, Dec. 30, 2017 at Our Savior’s Lutheran Church in Menomonie, with Pastor Sarah Miller officiating. There will be visitation at the church from 9:30 a.m. until the time of the service on Saturday. Burial will be in Riverside Lutheran Cemetery in Mondovi, WI in the spring. Olson Funeral Home in Menomonie is serving the family. In lieu of flowers, the family suggests memorials to Our Savior’s Lutheran Church or Stepping Stones of Dunn County.

The family of Barry C. Bloom created this Life Tributes page to make it easy to share your memories.