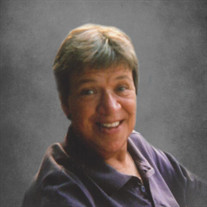 Barbara A. Scott, age 72, of Long Beach, CA, formerly of Menomonie, died unexpectedly Thursday, September 16, 2021 at the VA Hospital in Long Beach, CA. She was born on May 27, 1949 to Dale Scott and Frances (Keck). She grew up in a family of six siblings in Menomonie. She graduated from Menomonie High School in 1967. Barb had an interest in nursing. She volunteered as a candy striper at a nursing home and worked at Luther Hospital before going to WWTI in LaCrosse and receiving her LPN. During the Vietnam War, Barb joined the Navy. She received the following medals: Good Conduct Medal, National Defense Medal, and Humanitarian Service Medal (Vietnam Baby Lift to Naval Hospital Long Beach). She was last stationed at the Naval Hospital in Long Beach, CA where she served as an Ear, Nose & Throat Tech and as a Respiratory Therapy Technician. She was very proud of her service in the Navy. While in Long Beach she made lifelong friends that called her “Scottie”. She enjoyed playing guitar, singing, and dancing to great music. She very much loved her family and her pets. Mostly dogs. She named her first dog “Jimi” after guitarist Jimi Hendrix. Barb is survived by her sisters; Nancy (Steve) Braun of Arizona, Lynn Scott of Washington, Vicki Scott of Arizona, Sandy Scott of Menomonie, and Tracy Scott (Amber) of Arizona. She is also survived by a nephew Jay (Heather) Brown, and nieces Heather (Leon) and Rachel. She was preceded in death by her parents, Dale and Frances Scott, both maternal and paternal grandparents and many aunts, uncles and cousins. Graveside Services will be held at 3:00 p.m. Friday, Oct 1, 2021 at Christ Lutheran Halvorson Cemetery with military honors by the Menomonie Veterans Honor Guard. Family and friends are welcome. Olson Funeral Home is serving the family.

Barbara A. Scott, age 72, of Long Beach, CA, formerly of Menomonie, died unexpectedly Thursday, September 16, 2021 at the VA Hospital in Long Beach, CA. She was born on May 27, 1949 to Dale Scott and Frances (Keck). She grew up in a family... View Obituary & Service Information

The family of Barbara A Scott created this Life Tributes page to make it easy to share your memories.