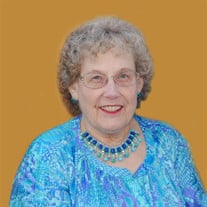 Barbara J. Bowlin, age 76 of Menomonie, WI passed away unexpectedly on Wednesday, March 13, 2019 at her home. She was born April 1, 1942 in Eau Claire, WI to William and Lucille (Zaborowski) Fisher. She graduated from Regis High in Eau Claire. On May 14, 1960 Barbara married Royal Bowlin. Their life of 54 years together flourished in big and everlasting ways. For 41 years Barb drove school bus; 33 of those she drove for Menomonie Transportation. She made a point to eagerly welcome each child and create a positive encounter. Barb was a member of the first Wisconsin Chapter of Muskie’s Inc. and the Wisconsin Wildlife Federation for many years. She was a long-time member of St. Joseph’s Catholic Church and TOPS. She was one of the initial founders of the Dunn County Humane Society, which was operated out of their home until a formal shelter could be built. Her passion was Bassett Hounds which she rescued tirelessly. She was also an avid quilter, knitter, card player & kids’ board game “loser.” She loved every minute of it. She favored spending time with her family. Most of all, her grandchildren & great grandchildren who say that “you could tell her anything with no judgement.” Her friends described her as a wonderful friend and could always be counted upon for help. Barb is survived by her children Connie Espina, Valerie (John) Spanjers, Jennifer (Bill) Hewitt, Jacquie Pack, Buddy (Tabitha) Bowlin; nine grandchildren, twelve great grandchildren, her siblings Ruth Getten, Sally (Mike) Ayers, Michael Fisher, Carl (Becky) Fisher, Kathy (George) Houser, Theresa (Larry) Mooney; she is further survived by many nieces, nephews, other relatives and friends. She was preceded in death by her parents, husband Royal Bowlin, father and mother-in-law Keith and Grace Bowlin, sisters June Palahnuik, Luanne Johnson, sister-in-law Ruth Bowlin, brother-in-law Bruce Getten and nephew Thomas Fisher. A gathering to celebrate Barb’s life will be held from 2:00 p.m. to 4:00 p.m. Sunday, March17, 2019 at the Menomonie Veteran’s Center (Foxhole Bar). In lieu of flowers, memorial are suggested to the Dunn County Humane Society.

Barbara J. Bowlin, age 76 of Menomonie, WI passed away unexpectedly on Wednesday, March 13, 2019 at her home. She was born April 1, 1942 in Eau Claire, WI to William and Lucille (Zaborowski) Fisher. She graduated from Regis High in Eau Claire.... View Obituary & Service Information

The family of Barbara J. Bowlin created this Life Tributes page to make it easy to share your memories.