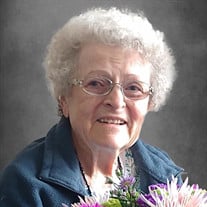 Avis A. Ranney, age 84, of Boyceville, WI passed away peacefully Sunday, April 24, 2022, at MCHS-Eau Claire with family at her side. She was born June 17, 1937 in Darien, WI to Ernest & Arlene (Schmid) Dutton. She grew up in Darien & graduated Delavan/Darien High School. After graduating high school, she took a job as a bank teller for a couple years. Avis then went on to college at UW Stout in Menomonie & graduated in 1961 with a Bachelor of Science degree in Home Economics. Avis was a member of the Alpha Sigma Alpha Sorority. While attending college, Avis met Edgar Ranney at the UW Stout Young Adults ministry group that she participated in & they were married on June 17, 1961, in Darien, WI. After marrying they lived on the Ranney family dairy farm north of Menomonie. Avis got her first teaching position upon graduation at Prairie Farm, WI where she taught Home Economics. She took a break from teaching in 1966 when they started their family & they had three children. She returned to teaching as a substitute when their youngest child started school around 1977, later she returned to teaching full time at Boyceville High School where she stayed until retiring. Avis was an active member of Farm Bureau & the Menomonie United Methodist Church where she taught Sunday School. She stayed very busy keeping her flower beds & the entire farm yard looking pristine & attending her children’s sporting events, which she rarely missed. She was often sewing, knitting or crocheting something. During the winter months she would crochet mittens & hats & then in the fall donate all of them to Churches, the C3 center of Menomonie & local schools for anyone in need. It was nothing for her to donate 120 – 150 hats a year. Avis is survived by her children; Kent (Ingrid) Ranney of Wisconsin Dells & Kris (John) Ranney-Zey of Boyceville; grandchildren, Dakota Ranney of Boyceville, Nelson Stewart of Menomonie, & Gina Ranney of Minnesota; brother Richard “Dick” (Fran) Dutton of Darien; sister Dodie Smith of Kenosha; sisters-in-law Linda Dutton of Beloit & Mary Ranney of Elk Mound. She is also survived by many nieces, nephews, other relatives & friends. She was preceded in Death by her parents, Ernest (Arlene) Dutton; brother John Dutton; Husband Edgar Ranney; daughter Kim Ranney-Easley; sister-in-Law Diane Ranney; brothers-in-Law Wendell Ranney & Roger Smith. Funeral Services will be held at 11:00 a.m. Friday, April 29, 2022 at Menomonie United Methodist Church (2703 Bongey Drive) with Pastor Wendy Slaback officiating. Burial will take place at Evergreen Cemetery in Menomonie. There will be a visitation from 9:00-11:00 a.m. at the church. The family would like to thank Azura Memory Care for caring for our Mother for the last three years.

Avis A. Ranney, age 84, of Boyceville, WI passed away peacefully Sunday, April 24, 2022, at MCHS-Eau Claire with family at her side. She was born June 17, 1937 in Darien, WI to Ernest & Arlene (Schmid) Dutton. She grew up in Darien & graduated... View Obituary & Service Information

The family of Avis A. Ranney created this Life Tributes page to make it easy to share your memories.

Avis A. Ranney, age 84, of Boyceville, WI passed away peacefully...