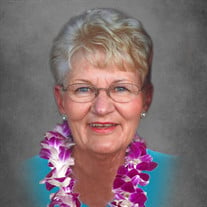 Avis Yvonne Oeltjenbruns, 76, went home to Jesus on March 15, 2020, after a valiant battle with Parkinson’s. Avis was born on October 30, 1943, to Clarence and Thelma Meyers in Wahpeton, ND. Avis married her high school sweetheart, Dennis Oeltjenbruns, on June 6, 1964. Together, they lived and worked on the family farm in Mt. Lake, MN, where Avis also worked at the light plant. While in Mt. Lake, they had two daughters, Stacey and Tracey. In 1977, the Oeltjenbruns’ moved to Nisswa, MN, where they owned and operated Oeltjenbruns Service. In 1981, they had a son, DJ. In addition to secretarial duties at the service station, Avis managed the Nisswa Dairy Queen for many years. In 2001, they moved to Bloomington, MN, where they both lived and worked at Poplar Bridge Apartments. Avis retired in 2002 due to Parkinson’s. In 2016, they moved to Menomonie, WI, to be closer to family. Avis was a compassionate, quiet, and kind-hearted soul who cherished God. Her family meant the world to her and she was so proud of them and loved them deeply, each in a unique way. Avis’ six grandchildren were the light of her life and she was a devoted and interested supporter and spectator of everything they did in their lives. Avis was a source of encouragement for everyone she met. She enjoyed family gatherings and visits, eating sweets, playing cards, baking, watching basketball, getting her hair and nails done, and talking about her family. Avis had a great sense of humor and her sweet smirk and giggle will be remembered fondly. Avis joins her parents, Thelma and Clarence, in heaven. Those who were privileged to share in her life include: her husband, Dennis; her children, Stacey (Steve) Siegle of Menomonie, WI, Tracey (Eric) Sorenson of Menomonie, WI, and DJ (Kristen) Oeltjenbruns of Minnetonka, MN. She was “Mimi” to six beloved grandchildren: McKinley Siegle, Madeline and Isabelle Sorenson, Liv, Lars, and Metta Oeltjenbruns. She is also survived by her sister Sharon (Dennis) Nordby and brothers Carl (Becky) Meyers and Rodney (Judy) Meyers and many nieces, nephews and special friends. The family is grateful for the wonderful care given by so many in our community. The incredible staff at The Neighbors-Deerview Manor, Amy Whelan (a dear friend of Avis’), Pastor Heather Wigdahl of Our Savior’s Lutheran Church, Dr. Paulson, Trisha Hagene-Nilsen and Dr. Brown all cared for Avis with such grace and kindness and have meant so much to her in the past year. A Celebration of Life to honor both Dennis and Avis will be held at 11:00 am Saturday, June 12, 2021 at Our Savior’s Lutheran Church in Menomonie followed by a luncheon. Visitation will be one hour prior to the service at the church. In the meantime, a video tribute is available under photo/videos.

The family of Avis Y. Oeltjenbruns created this Life Tributes page to make it easy to share your memories.