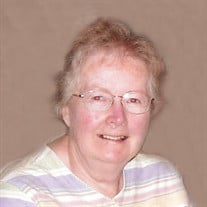 Audrey Gayhart, 81, passed into the arms of Jesus on Wednesday, Dec. 6, 2017 after a brief yet courageous battle with cancer. She was born to George and Helen (Griffin) Price on March 14, 1936 in Kenosha, Wisconsin. Audrey was a descendent of Puritans who, in 1632, settled in what became Massachusetts. She was proud of her English and Welsh heritage. The Price family century farm, Clear Acres, in Kenosha County, was her home through childhood and for several years following her marriage to Robert “Bob” Gayhart in June of 1956. As a young girl, Audrey was very active in 4-H. She showed her family’s purebred registered Jersey’s in regional, national and international cattle shows. Audrey also played piano, organ and clarinet. Audrey graduated from Wilmot High School in 1954. She attended Stout State University in 1954-55 studying home economics education. Audrey’s closest childhood friend arranged a blind date for Audrey with a tall, handsome Army Private who was home on leave. Love Bloomed. After getting engaged to Bob, Audrey abandoned her educational pursuits. She went on to work as the executive secretary for the international vice president at Simmons Mattress in Kenosha until she was expecting their first child. Audrey served as the church organist at Paris Corners United Methodist Church, a church built in rural Kenosha County by her Welsh ancestors, until the family moved to Dunn County in November of 1967. Bob and Audrey shared a love for Jesus, family, their beloved Twin Brook Farm, their Holsteins and Red Angus, wild birds, dogs and cats. They were members of Hay River Lutheran Church prior to hosting a house church, Zion New Testament, for several years. Bob and Audrey were active in the Menomonie Alliance church for over thirty-five years. Audrey was an excellent cook and baker. She thoroughly enjoyed creating clothing, home furnishings and, most recently, award-winning quilts. She was active in Plainview Homemakers for many years. Her passion for quilting led her to teach numerous classes and to cofound the Hearts and Hands Quilt Guild in Boyceville. Bob, Audrey’s spouse of sixty years, went home to be with the Lord in January, 2017. She was also preceded in death by her parents, foster brother, and one great-granddaughter. Audrey is survived by her daughters, Sharon (Tom) Coates, and Linda (Larry) Lamb; grandchildren, Dan (Echoe) Coates, Joy (Luke) Fell, Luke (Sarah) Coates, and Jesse (Ashlee) Coates; step-grandchildren Scott (Sharon) Lamb and Chrissy (Dan) Lingenfelter; eleven great-grandchildren, numerous nieces and nephew, cousins, and friends. The family would like to thank everyone for their prayers and support. Thank you to the staff of The Neighbors, Mayo Clinic Health System-Hospice, and all the healthcare providers who cared for Audrey. A special thank you to Sharon and Tom Coates, and Ashlee and Jesse Coates for their selfless sacrifice in caring for their mom and grandma. Funeral services will be held at Menomonie Alliance Church at 11:00 a.m. Monday, Dec. 11, 2017 with Pastor Doug Stolhand officiating. There will be visitation from 4:00 to 7:00 p.m. Sunday at Olson Funeral Home in Menomonie and at the church one hour prior to the service on Monday. Burial will be in Evergreen Cemetery in Menomonie immediately following the funeral.

Audrey Gayhart, 81, passed into the arms of Jesus on Wednesday, Dec. 6, 2017 after a brief yet courageous battle with cancer. She was born to George and Helen (Griffin) Price on March 14, 1936 in Kenosha, Wisconsin. Audrey was a descendent... View Obituary & Service Information

The family of Audrey A. Gayhart created this Life Tributes page to make it easy to share your memories.

Audrey Gayhart, 81, passed into the arms of Jesus on Wednesday,...