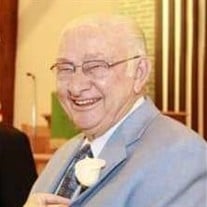 Our Lord, in the always loving way in which he deals with his children, in his infinite wisdom chose to call to himself the soul of Arlyn Lorraine Schmeling while he was at Banner Boswell Hospital is Sun City, AZ. He was given the breath of life from the hand of our Lord on January 26, 1930 to his parents Elmer and Myrtle Schmeling in Minneota, MN. The Lord brought Arlyn into his family and made him one of his own through baptism as Scripture commands and offers the blessing of forgiveness of sins (Acts 2:38). This baptism took place on June 29, 1930 at Federated Church of Marshall, MN. Arlyn was confirmed in that Christian faith also at St. John, Rauville, South Dakota by Pastor Martin Lemke on July 18, 1943. His Confirmation Passage was Revelation 2:10, “Be thou faithful unto death and I will give thee a crown of life.” He chose a partner for himself in life and his ministry. He married Evelyn Heldt on May 13, 1950. The Lord blessed that marriage with 7 children. A son and a daughter have preceded him in death. He chose a vocation in life that would allow him to give glory to God on a daily basis. His desire was to serve the Lord and his family in faithful service as a Pastor in the Wisconsin Evangelical Lutheran Synod. He graduated from the Seminary in Mequon in 1956. He served congregations in...Maumee, OH; Fort Madison, IA; Lena, Oconto Falls, and Spruce, WI; Two Rivers, WI; Alexandria, LA; Scottsbluff, NE; Little Rock, AR and Torrance, CA. He retired from the full-time ministry in 1998 but still continued the ministry on a part time basis. In addition to his parents, he was preceded in death by two brothers: Richard and Frank; one son, Paul and an infant daughter, Ruth Ann. He is survived by his wife, 3 daughters, Angela Klatt (Darvin), Rebecca Klatt (David), and Marian Wiechmann (Gaius). One daughter in law, Beth Schmeling. Two sons, James (Martha) and Steve (Paula). Six sisters and one brother, as well as 26 grandchildren, 45 great grandchildren, and many nieces, nephews, cousins and dear friends. Job tells us “I know that my redeemer lives, and that in the end he will stand on the earth.” We pray that you know this redeemer. He will uphold you, even in loss, and give strength in his word. Funeral services are planned for 11:00 a.m. Friday, December 14th at Our Saviors Lutheran Church in Sun City, AZ, and at St. Paul’s Lutheran Church in Menomonie, WI at 11:00 a.m. on Friday, Jan 4th, 2019. There will be a 1 hour visitation prior to both services. Memorials are suggested for WELS High Schools and Colleges, WELS Missions or Our Saviors Lutheran Church in Sun City, AZ. Olson Funeral Home of Menomonie, Wisconsin is serving the family.

Our Lord, in the always loving way in which he deals with his children, in his infinite wisdom chose to call to himself the soul of Arlyn Lorraine Schmeling while he was at Banner Boswell Hospital is Sun City, AZ. He was given the breath of... View Obituary & Service Information

The family of Arlyn L. Schmeling created this Life Tributes page to make it easy to share your memories.

Our Lord, in the always loving way in which he deals with his...