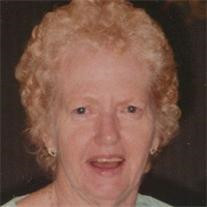 Arlene Josephine Tiefenbacher, 84, died Wednesday at the Neighbors of Dunn County nursing home, where she spent the last seven weeks of her life after suffering a traumatic head injury from falling down stairs four years previous. Thanks to the tender care of the nursing staff there, she spent those weeks in comfort and good spirits without a great deal of suffering. Arlene was preceded in death by her parents Theodore and Alice (Rein) Hildebrand, her sister Theodora ("Teddy" or "Terry") Danecki, brothers Harold (Yasuko) Hildebrand, John Hildebrand, and Leland (Evelyn) Hildebrand, and by her son Larry (Deborah) Tiefenbacher. She is survived by her loving sons Michael of Menomonie, Ron (Deborah) of Spring Hill, TN, and John of Wimberley, TX; grandchildren Nicole (Timothy) Smith, Chad Tiefenbacher, Jennifer (Stephen) Schultz, and Alexandra "Sasha" Tiefenbacher, step-grandchildren Jennifer (Brian) Henderson, Brandon (Amanda) Elfstrom, and Jill Elfstrom, and great grandchildren Dylan Smith, Zoe and Savannah Tiefenbacher, Devin and Brittany Schultz, step-great grandchildren Aiden, Austin and Ashton Elfstrom, Hudson Henderson, as well as beloved sisters Marjorie Paul, Bernice Jakel, Penny Stadele, and brothers Dallas (Susan) Hildebrand, Gary (Debra) Hildebrand and Kieth (Joyce) Hildebrand, as well as 45 nieces and nephews and innumerable great nieces and nephews. Arlene was born August 16, 1930 in Butternut, Wisconsin. She attended Butternut High School, which, as the eldest of her siblings, she left at age 16 to go to Milwaukee to work as a live-in maid to help support the family. Several years later she became an employee of the phone company, and met WWII veteran and future husband Donald in 1946 at a dance at the Eagle's Club in Milwaukee. They married October 23, 1948 and moved in with Donald's parents and sister on the city's north side. Sons Michael (1952), Larry (1954) and Ron (1956) were born there, and after Donald acquired a job with Allis-Chalmers of West Allis, the family moved to their own northwest Milwaukee home in 1957. She gave birth to son John in 1962, around the time Donald was laid off from Allis-Chalmers. After a stint as a postal carrier, Donald was hired at the University of Wisconsin-Milwaukee and at around the same time, Arlene took a job with a photo-processing company called Phototron (later Realist), and they took the opportunity to move the family to Menomonee Falls, Wisconsin in 1968. Arlene earned her GED in 1973 and moved to a new job with Graham of Menomonee Falls where she assembled printed-circuit boards until her retirement in 1992. After her son Larry died in 1992, she and her husband and son Michael moved to Menomonie, Wisconsin in 1993 to be closer to her mother, brothers and son Ron. Aside from her vocations, Arlene was a skilled home do-it-yourselfer, installing, finishing and wiring two attic bedrooms from scratch at the north-side home in Milwaukee, and converting the basement into a rumpus room in Menomonee Falls. She was also a skilled at crafts, creating wall decorations from wood, painting and finishing plaster Christmas villages and crèche figurines, creating hundreds of individual Christmas ornaments, knitting, weaving and other intricate handicraft, most of which she had to abandon when familial tremors set it in the early '90s. She was a gardener and birder, and loved doing daily newspaper crossword puzzles in ink. Most of all, she was an avid reader, owning and reading more than a thousand titles in her collection. She and her husband visited 49 of the 50 states plus Canada and Mexico in their mini-motorhome, missing only Alaska. And she was an expert genealogist, mapping her family back to the early 19th century, a task since taken over by her son John. In 2002, she became one of the first people in the country to receive neural implants to contend with the familial tremors, then an experimental surgery. In July of 2010, following her husband's similar accident the previous year, she herself fell down the same stairs as he had, requiring brain surgery, and spent nearly five months in the hospital and nursing home recovering, returning home until July, 2014, when she went back into the hospital and subsequently, the nursing home. Arlene was warm, friendly and generous and beloved by everyone she met. Arlene will be buried on Friday, August 29, 2014 at the Northern Wisconsin Veterans Memorial Cemetery in Spooner, WI, where she will rest alongside her husband Donald.

Arlene Josephine Tiefenbacher, 84, died Wednesday at the Neighbors of Dunn County nursing home, where she spent the last seven weeks of her life after suffering a traumatic head injury from falling down stairs four years previous. Thanks to... View Obituary & Service Information

The family of Arlene J. Tiefenbacher Obituary created this Life Tributes page to make it easy to share your memories.