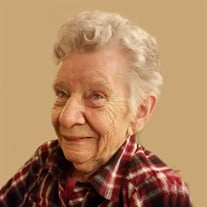 Arlene (Weaver, Anderson) Koeneman went to her Lord in heaven on February 28, 2017 at the age of 86. Arlene was born October 8, 1930 to George and Mary Weaver. Arlene loved spending time with her family and friends. She was active in Hay... View Obituary & Service Information

The family of Arlene M. Koeneman created this Life Tributes page to make it easy to share your memories.

Arlene (Weaver, Anderson) Koeneman went to her Lord in heaven...