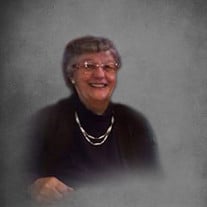 Arlene F. Finder, age 79, of Blaine, MN passed away Sunday, Aug. 4, 2019 at Mercy Hospital in Fridley, MN. She was born March 2, 1940 in the Town of Stanton, St. Croix Co., WI to Joseph and Martha E. (Bowen) Walsh. She was raised in the Ladysmith area and graduated from Ladysmith High School. Arlene married Harold Kringle and together they had five children. They were divorced and remarried. She later married Herman Finder who also preceded her in death. Arlene worked as a telephone operator for many years, she also worked for West Cap in Glenwood City and in the lunchroom at Cedar Falls School in rural Menomonie. Arlene loved reading, cooking, writing and drawing. She was a wonderful mother, who would do anything for you and never had a bad word to say. She was truly an angel and will be sadly missed. Arlene is survived by a son, Doug (Wendy Cooper) Kringle; her brother Robert (Wanda) Walsh; four sisters, Marybelle Walsh, Jeanie Bergeron, Marion Nerase and Julie Jelmberg; as well as nieces, nephews, other relatives and friends. She was preceded in death by her parents; an infant daughter Mary Louise; two sons, David and Donald in 1977; and a daughter Diane Kringle in 2017; her brother Earl Walsh in 2009; her husbands, Harold Kringle and Herman Finder. Funeral services will be held at 11:00 a.m. Thursday, Aug. 8, 2019 at Olson Funeral Home in Menomonie, WI with Pastor David Natzke officiating. There will be visitation at the funeral home one hour prior to the service on Thursday. Burial will be in Lucas Cemetery in the Town of Lucas, Dunn Co. WI.

The family of Arlene F. Finder created this Life Tributes page to make it easy to share your memories.