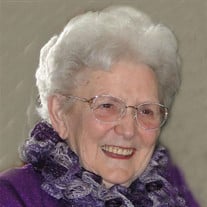 Ardis Mae Teegarden went home to our heavenly father on Friday, November 10, 2017 at the age of 84. Ardis was known by many as "The Cake Lady." She established Teegarden Cake & Party Supplies in 1972, running it until her later years. Her artistic talent for cake decorating and her ability to design unique, one-of-a-kind specialty cake toppers helped many others acquire treasured family memories for over 40 years. Ardis also passed on her skill as a professional cake decorator by teaching students at many sites in and around the surrounding counties. Her amazing smile warmed the heart of all she met. While Ardis enjoyed her job, which was also her hobby, her first love was always her family and spending time with them. All her grandchildren and great-grandchildren were the main characters in the stories she shared. She adored them all. Ardis met Levi Joy Teegarden, "the country kid", on the dance floor at the 400 Club. It was love at first sight. They were married on August 8, 1952, and that dance of love continued for over 65 years. Their love for each other was visibly evident to all they met. They set the standard for every generation to follow about what the definition of husband and wife really meant. She is survived by her husband, the love of her life, Levi Joy Teegarden; her children: Cindy Teegarden Klatt (Bob Meyer) Rick (Deb) Teegarden, Lori Teegarden; and Kristi Binkley - a "special person whom she thought of as her daughter;" her sister Irene Robinson and Ardie's sister-in-Law Jane Orfgen. Ardis and Joy have been blessed with 11 grandchildren, 18 great grandchildren, and 3 great-great grandchildren, along with many nieces, nephews, cousins; and a very special pure white cat named Angel. She was preceded in death by one son, Levi Doreen; her parents - Leonard and Della Orfgen; her mother-in-law & father-in-law Levi & Julia Teegarden; step mother Georgia Orfgen; brothers Don & Lynn Orfgen; sisters-in-laws; Minda Peterson-Nazier, Mary Orfgen and Mildred Teegarden; brother-in-laws Bob Robinson, Leroy Teegarden, and Erling Peterson. Olson Funeral Home in Menomonie, WI will be handling the arrangements, with visitation from 4:00-7:00 p.m. on Sunday, November 19, 2017. The Funeral Service will be held at Olson Funeral Home on Monday, November 20, 2017, at 11:00 a.m. with visitation one hour prior to the service. Pastor Mike Shay will officiate. The burial will be at the Teegarden Cemetery in the Town of Lucas, Dunn County following the funeral service, with a luncheon to follow at the Village Hall in Knapp.

Ardis Mae Teegarden went home to our heavenly father on Friday, November 10, 2017 at the age of 84. Ardis was known by many as "The Cake Lady." She established Teegarden Cake & Party Supplies in 1972, running it until her later years. Her... View Obituary & Service Information

The family of Ardis M. Teegarden created this Life Tributes page to make it easy to share your memories.