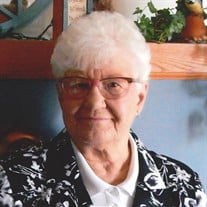 April H. Chryst, age 91, of Menomonie, WI received her Angel Wings on Wednesday, April 12, 2017. She died at her home surrounded by family. April is the daughter of William and Nellie (Pechmiller) Grutt. She was born and raised in the Iron Creek area in Dunn County, WI. She graduated from Dunn County Aggie in 1944. During her high school years, she met the man of her dreams Dallas E. Chryst. April went to work in the Twin Cities when Dallas joined the Army. Upon return from boot camp, Dallas and April were married within a week’s time and April followed Dallas to California where he was stationed. Out of that union two children were born, Michael Dallas and Marcia Jean. April’s family was the most important thing to her right up until her death. After discharge from the Army, Dallas and April settled in the Menomonie area and April worked in various secretarial jobs. Their son Michael was killed in 1976 and April soon thereafter stopped working and became a stay at home mom for Marcia. April’s pride and joy in her life was her grandson, Jason, who was born in 1979. She took care of Jason for the first three years of his life and spoiling him was her number one job. April was a very quiet and behind the scenes lady, but she was the glue that held her family together. April is survived by her daughter, Marcia (Ron) Finder; grandson Jason (Sarah) Cramer; brother Merlin Grutt, brother-in-law and sister-in-law Allan and Joelene Loew and John and Jackie Dotseth; nephew Tim (Sandy Haesley) Dotseth and nieces, Sue (David) Halama, Tammy (Ray) Clarke, Nancy (Tryn) Grutt, and Patricia Emerson. She is also survived by many other relatives and friends. She was preceded in death by her husband Dallas; son Michael; sister and brother-in-law, Alvira and Wes Schultz and brother-in-law Dwayne Chryst. The family would like to thank the doctors and nurses for their care of April and especially thank a very special friend of the family for her care of April. A Memorial Service will be held at 4:00 p.m. Sunday, April 23, 2017 at Olson Funeral Home in Menomonie, WI with Pastor Kathleen Remund officiating. There will be visitation from 2:00 p.m. until the time of the service at the funeral home. Burial will be in Christ Lutheran Halvorson Cemetery in Menomonie.

April H. Chryst, age 91, of Menomonie, WI received her Angel Wings on Wednesday, April 12, 2017. She died at her home surrounded by family. April is the daughter of William and Nellie (Pechmiller) Grutt. She was born and raised in the Iron... View Obituary & Service Information

The family of April H Chryst created this Life Tributes page to make it easy to share your memories.