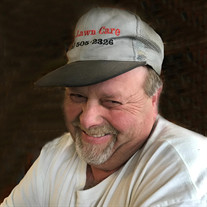 Anthony “Andy” Edward Reinolt, age 46, of Colfax, WI passed away peacefully Sunday, June 23, 2019 at the Glenhaven Nursing Home in Glenwood City, WI after a battle with cancer. Andy was born December 18, 1972 in Rice Lake to Glen and Luella Reinolt. He was later adopted by his loving parents Ardys Wigdahl and the late Keith Wigdahl. He attended school in Eau Claire, Elk Mound, and graduated from Colfax High School in 1992. After high school, Andy worked on numerous Dairy farms in the Colfax surrounding area. Andy was then blessed with the arrival of his son Colin in 2006. He opened his own business A.R. Lawn Care and Snow Removal which he ran successfully up until his passing. Andy loved spending time with his son, his mother, his friends, watching his son’s activities, tinkering in his shed on numerous projects which included four wheelers, tractors, snowmobiles, lawn mowers, and anything automotive. Andy also enjoyed going to tractor pulls, traveling to local concerts, summer festivals, stopping at local restaurants and joking with people and making folks laugh. Andy was an active member (volunteer) of the Sand Creek Fire Department and enjoyed helping others who were in need from any type of an emergency. Andy was an amazing father, son, friend, owner, boss, and cousin who cared for each person he met. It has been said, “Andy would be the perfect person to run into if you were broken down on the side of the road.” I’m sure he is using his gifts in heaven right now! Andy will be greatly missed by all who knew him. Andy was a generous man who gave of himself. Andy is survived by his vibrant son Colin (age 13), his loving mother Ardys Wigdahl of Colfax, his aunt and uncle Merlin Linda Reinolt of New Auburn, his cousins Mark and Wendi Reinolt (Idaho), and Stacy Reinolt and Curt Gendron (Minnesota), Kateland Reinolt and Lily Holmes (Idaho). He is also survived by Jenna and (Andy) Nelson (Colin’s mother). Also, his little puggle named “Sassy.” Andy was preceded in death by his father Glen Reinolt, his father Keith Wigdahl, his brother Eric Wigdahl his grandparents Edward and Adeline Reinolt and Kimbal and Verna Wigdahl. Funeral Services will be held at 12:00 PM Thursday, June 27, 2019 at the Olson Funeral Home in Menomonie, WI with Pastor Jordan Herrick officiating. Family and friends are welcome at the funeral home two hours prior (10:00 AM) to the service on Thursday. A lunch will follow the funeral service at Olson Funeral Home. The burial will follow the luncheon at Dovre Lutheran Church Cemetery 231 25 ½ St, New Auburn, WI 54757.

The family of Anthony E. Reinolt created this Life Tributes page to make it easy to share your memories.