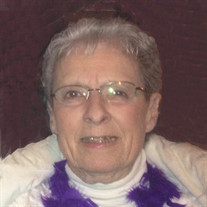 Ann Marie (Buss) Milliren, Grassl passed away peacefully at home with her family by her side on August 31, 2018. She was born in Menomonie, WI on January 7, 1937 to Earl and Leona Buss, Annie beat breast cancer but lost out to pancreatic cancer. Ann was a big New York Yankee fan, but that changed when BRETT FAVRE showed up in Green Bay. Although she always rooted for the Packers it intensified with the addition of "The 'Ol Gunslinger." Ann and Richard packed up their lake home and moved to "Titletown" last August. She also was able to rekindle old relationships bringing her great comfort. Ann was an incredible athlete, particularly on the softball diamond, playing short stop and hitting fourth in the lineup. With herself and Caryll always around the diamond it sparked the interest of their children who all competed in sports due to their fierce competitive guidance. Annie loved being around people, dancing with Richard and playing her slot machines. She was always quick with comebacks with a great sense of humor. Ann married Caryll “Sam” Milliren in 1958. Together they had 4 children, Caryll passed away after 20 years of marriage to Ann. She later married Richard Grassl in 1988. Since then Richard was instrumental in supporting Ann and the four children. She will be missed by her husband Richard Grassl, 4 children Kim Milliren, Lynn Milliren (Cathy Halron), Timothy Milliren and Traci (Zakk) Holt. Daughter in-law Shawn Milliren. 4 Grandchildren, Darius and Dionna Holt and Samantha and Griffin Milliren. Siblings Gary (Sharon) Buss, Earlene Way, Dan (Katie) Buss, nieces, nephews, cousins, friends and special friend Pat. Preceding her in death was her parents Leona and Earl Buss, husband Caryll “Sam” Milliren and her brother in-law William Way. Visitation will be held at Olson Funeral home, at 615 Wilson Ave. Menomonie WI 54751 on Saturday September 8th, 2018 from 10AM-12PM. A Funeral Service will follow at 12 PM with Pastor Bob Friese officiating.. Burial will be in Peace Lutheran Cemetery in the Town of Menomonie, Dunn Co. WI. The family would like to thank the Heartland Hospice staff of De Pere, WI for their excellent care of Ann. To share a memory, please visit obituaries at www.olsonfuneral.com

Ann Marie (Buss) Milliren, Grassl passed away peacefully at home with her family by her side on August 31, 2018. She was born in Menomonie, WI on January 7, 1937 to Earl and Leona Buss, Annie beat breast cancer but lost out to pancreatic cancer.... View Obituary & Service Information

The family of Ann M Grassl created this Life Tributes page to make it easy to share your memories.