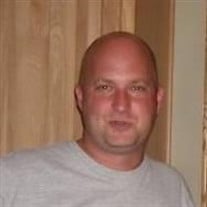 Andrew G. Baker, age 46, of River Falls, WI, formerly of Menomonie, died on Monday, April 8, 2019. We are saddened that Andy’s life was taken too soon by his own hand. Andrew Gardner Baker was born Oct. 6, 1972 in Robbinsdale, MN. He graduated from Menomonie High School in 1991. In 1995, he received a Bachelors Degree in Athletic Training from U.W. La Crosse and in 1996 received a Masters Degree in Sports Medicine/Athletic Training from the University of Virginia. Andy worked as an Athletic Trainer for University of Michigan, USA Hockey and Assistant Athletic Trainer, University of Virginia, Head Athletic Trainer for U.W. Eau Claire, and most recently Head Athletic Trainer for U.W. River Falls. His commitment to athletic training led him to become treasurer for the Wisconsin Athletic Trainers’ Assoc. Andy loved music and yearly went to the New Orleans Jazz Festival. He had an extensive sports card collection and enjoyed reading and gaming. He was also an avid fisherman and hiker and loved spending time at the cabin fishing and relaxing. One of his favorite events was the annual “GordonFest.” Andy prided himself on his sarcasm and wit and was a master at getting in the last word. One of his mottos was “If sarcasm was an Olympic sport, I would have a gold medal.” Andy is survived by his parents, Richard and Barb (Gardner) Morrison; his sister Ali (Kevin) Kahl; the two people that brought him the greatest joy: his nephews Derek and Ryan Kahl; step-brothers and step-sister, Duane, Eric, Anne, Russ and Roger Morrison; aunts and uncles, Sandie (Jim) Zaranti, Dick (Nancy) Gardner and Neil Gardner and Godparents Chuck and Pam Lindquist. He is also survived by numerous cousins and many close friends. He was preceded in death by grandparents Kenny and Millie Gardner. A Celebration of Life will be held at 3:00 pm on Wednesday, April 17, 2019 at First Congregational UCC Church in Menomonie, with Pastor Kathleen Remund officiating. Following the service there will be refreshments and a time to visit with family and friends. Olson Funeral Home in Menomonie is serving the family. In lieu of flowers, memorials are suggested to University of Wisconsin-La Crosse Foundation, 615 East Avenue North, La Crosse, WI 54601. Please direct your contributions to the Andrew Baker Scholarship Fund. Andy’s creed: Therapy Amuses--Time Heals.

The family of Andrew G. Baker created this Life Tributes page to make it easy to share your memories.