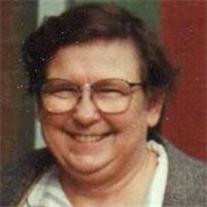 Alta Vasey Morgan passed away on September 25, 2012 in Menomonie Wisconsin after a battle with bladder cancer. Alta Lonavern (Vasey) Morgan was born March 8, 1934 in Owen, Wisconsin, Clark County to Carl Edwin Beck and Alta Genevieve (Harshman) Beck. Her mother knew that she was going to die, so it was decided that baby Alta would be adopted by her uncle and aunt Paul and Lonavern (Harshman) Vasey. She had two older brothers, Gail E. Beck and Winston O. (Pinkey) (Cockeram) Vasey. Alta was raised in Menomonie and attended the local grade school and high school. She worked as a nurse's aide at Memorial Hospital before attending Luther Hospital School of Nursing in Eau Claire, Wisconsin and graduated in spring of 1956. After graduation, Alta began her nursing career working at Luther Hospital, and later moved to General Rose Memorial Hospital in Denver, Colorado where she met her husband to be while she was flat on her back under badminton net at Wesley Foundation House in Boulder, Colorado. They began dating and married a year later in Menomonie. They were blessed with two sons, Joseph Weston (Wes) Morgan, and Benjamin Edwin Morgan. Immediately following her marriage, Alta continued to live and work in Colorado for several years and taught nursing in Colorado Springs at Memorial Hospital School of Nursing. Alta and her family then moved to Arizona, and later settled in the Coos Bay area on the Oregon coast. Alta returned to Menomonie where she has lived for the past few decades. Alta grew up hunting and fishing with her brothers and continued this passion into adulthood, butchering her own meat. A lover of great foods, Alta regularly tried nearly everything presented and encouraged other to "catch it, clean it and eat it," a tradition she learned from her brothers. She loved moose, but often settled for venison, elk or any other game. Alta spent her life raising and nurturing plants, people and animals. She worked with her Mom (Lonavern Harshman Vasey) and Mammy (Grandmother Jesse Harshman) in their gardens and continued her gardening (including a victory garden at the end of WWII) all of her life, growing food and flowers. An avid rock hound throughout her life, Alta nurtured this interest in many others. She made jewelry with many of her semi-precious stones, from her collection, and sold the jewelry throughout the Menomonie area. Alta's lifelong community commitment began with the Girl Scouts, and church groups, and led her to be selected as a founding member of the Dunn County Urban Forestry board, and in 2012 she was honored with a plaque for her service. Alta was also part of the General Federation of Woman Club, and they with much work from Alta, ultimately created the hanging basket program to beautify the downtown Menomonie area each summer. Much of the information for this project she received from her brother Gail, who taught Horticulture at the University of Wisconsin-Madison. Alta was a member of the Methodist Church, both district and conference, in every community of residence. One highlight of Alta's life was the garden tour led by her brother Gail Beck to England, France, Germany, Switzerland and Holland with three generations of her family, her Aunt Libby Harshman, Alta and her son Wes, and her brother Gail and his wife Lois. Alta is survived by two sons, Wes Morgan of Eugene, OR and Ben Morgan of Alameda, CA; a brother, Gail Beck of Florida as well as nieces, nephews, many cousins, other relatives and friends. She was preceded in death by her parents, Paul and Lonavern Vasey and a brother, Winston Vasey. A Memorial Service will be held at 11:00 a.m. Saturday, Oct. 6, 2012 at the United Methodist Church in Menomonie, with Pastor Don Gribble officiating. There will be visitation from 4:00 to 7:00 p.m. Friday Oct. 5, 2012 at Olson Funeral Home in Menomonie and at the church one hour prior to the service on Saturday. Burial will be in Evergreen Cemetery in Menomonie.

The family of Alta Morgan Obituary created this Life Tributes page to make it easy to share your memories.

Alta Vasey Morgan passed away on September 25, 2012 in Menomonie...