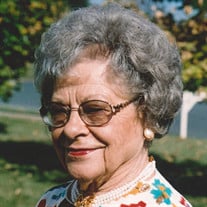 Alice I. DeLong age 99 of Menomonie, died August 30, 2018 at home. She was born on October 1, 1918 in the Town of Red Cedar, Dunn County, WI to Alfred and Edna (Grundman) Beguhn. Alice was baptized and confirmed at the Iron Creek Evangelical Church. Alice attended a small country, one room school. After graduating from the 8th grade, she went to Menomonie High School and then to the Dunn County Normal. Alice married Arthur W. Delong on November 17, 1937 in Minnesota. They lived in the Weston area for a few years, before they moved to Detroit, Michigan in 1942. During the war, Alice worked at Cadillac Motor Company where she made parts for Allison Airplanes. After the war, she worked 8 years at the J.L. Hudson department store, then went to work for Michigan Bell Company until retiring after 28 years of service. In 1979, they moved back to Wisconsin to the Lake Tainter area. She enjoyed camping, fishing, and gardening. Each year Arthur and Alice managed to take a trip with their motor home or by chartered bus. Due to Arthur’s health, they moved into the City of Menomonie in 1994. Arthur passed away in 1996. Later in life, Alice met Gordon Peterson. Not only did they become best friends, Gordon was her caregiver which allowed her to stay at home despite her health issues. Alice is survived by her sisters Doris Dahlby, Mildred Baxter, Marjory (Howard) Smith, nieces, nephews and cousins. She is further survived by her partner and best friend, Gordon Peterson and his daughter, Cathy Wheeler and his son, Richard Peterson. She was preceded in death by her parents, her husband Arthur, sisters, Grace Waren and Helen Amick; brother, Lyle Beguhn, brothers-in-law, Richard Dahlby and Lorne Baxter. Funeral Services will be held at 11:00am, Tuesday, September 4, 2018 at Salem Iron Creek United Methodist Church, Township of Spring Brook, Dunn County with Pastor Allen Christiansen officiating. Burial will take place at Salem Iron Creek Cemetery. Visitation will be 1 hour prior to the service at the church.

Alice I. DeLong age 99 of Menomonie, died August 30, 2018 at home. She was born on October 1, 1918 in the Town of Red Cedar, Dunn County, WI to Alfred and Edna (Grundman) Beguhn. Alice was baptized and confirmed at the Iron Creek Evangelical... View Obituary & Service Information

The family of Alice I. DeLong created this Life Tributes page to make it easy to share your memories.