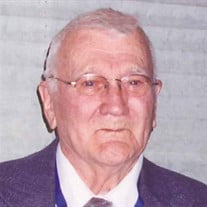 Alfred M. Olson, age 90, of Menomonie, WI passed away Tuesday, Dec. 16, 2014 at The Neighbors of Dunn County. He was born March 7, 1924 to Ole and Esther (Martin) Olson, in Crystal Falls, MI, a place that held many special memories, especially Fortune Lake. As a teen, Al was involved in Boy Scouts, becoming an Eagle Scout, something he was proud of his entire life. Al proudly served with the U.S. Navy SeaBees during W.W. II. Following the war he received his M.F.A. from the Art Institute of Chicago. While living in Chicago he met the love of his life Margaret. Alfred taught art at several colleges before moving to Menomonie, to own Olson Handicrafts. Eventually Al returned to his passion of teaching art with the Menomonie Public Schools, where he inspired many young children. In retirement Al and Margaret took many trips, volunteered and were especially fond of spending time with their grandchildren and great-grandchildren and at the family cabin. Alfred was an accomplished artist whose work was displayed at the Art Institute, The Walker Art Center, Mayo Clinic Health System, among other places. He enjoyed performing at the Mabel Tainter Theater, where he was involved in over 15 plays. He was also a proud member of Kiwanis, receiving The George F. Hixon Fellowship, one of their highest honors. Al was a long time member of the United Methodist Church and was involved with many other local organizations as he thought giving back to the community was both a responsibility and a privilege. Alfred was an incredible husband, father, grandfather, friend, and teacher who loved God, his family, nature, and art. He touched countless people with his kindness and will be incredibly missed. The world is a better place because of Alfred. Thanks to the many caregivers at The Neighbors of Dunn County and his doctors who gave Alfred and his family extraordinary care over the past several months. Alfred is survived by his loving wife Margaret, son Mark (Andrea), daughters, Patricia (Tom) Rossez, Carolyn Olson-Radley, Gretchen (Stan) Apelgren; grandchildren, Jared, Ashley, Taylor, Forrest, Dustin, Shelby, Sierra, Claire, Grace and Elise; great-grandchildren, Aubrey, Ashton and Jena; and many other relatives and dear friends. He was preceded in death by his parents; a brother Glenn, a sister Mildred and a grandson Joshua. Funeral services will be held at 11:00 a.m. Saturday, December 20, 2014 at the United Methodist Church in Menomonie, with Pastor Wendy Slaback officiating. There will be visitation from 4:00 to 7:00 p.m. Friday at the church and one hour prior to the service on Saturday at the church. Burial with military honors will be in Northern Wisconsin Veterans Memorial Cemetery in Spooner, WI at a later date.

Alfred M. Olson, age 90, of Menomonie, WI passed away Tuesday, Dec. 16, 2014 at The Neighbors of Dunn County. He was born March 7, 1924 to Ole and Esther (Martin) Olson, in Crystal Falls, MI, a place that held many special memories, especially... View Obituary & Service Information

The family of Alfred M. Olson created this Life Tributes page to make it easy to share your memories.