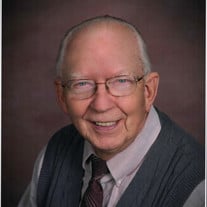 Alfred G. “Gus” Almquist, Jr., age 78, passed away Monday, April 18, 2016 at The Neighbors of Dunn County after a short battle with cancer. He was born August 10, 1937 in Superior, WI to Alfred Almquist, Sr. and Anna Nader. He grew up in Chippewa Falls and graduated from Chippewa Falls High School in 1955. After serving in the U. S. Air Force, he returned to Chippewa Falls, where he met Geneva (Neck) Anderson. They were married on October 17, 1964 at Zion Evangelical United Brethren Church in Chippewa Falls. In 1974, Gus and his family relocated to Menomonie, where he operated the Montgomery Ward catalog store until 1985. He later worked at Wal-Mart until his retirement in 2012. He was very active as a member of Menomonie Alliance Church and also enjoyed volunteering for various community organizations. Gus was an avid outdoorsman and loved to share his time in nature with his family and friends. Gus is survived by his wife Geneva; his children Pamela Dahms, Alfred (Diane) Anderson, David (Jennifer) Almquist, and Rebecca Lind; grandchildren Stephanie Drinkman, Joshua Dahms, Alicia (Curtis) Lemke, Brandon Anderson, Andrew Almquist, Matthew Almquist, Lydia Almquist, Alexandra Lind, and Noah Lind; six great-grandchildren; siblings Frank (Peggy) Almquist, Elaine Almquist, Paul (Margaret) Almquist; and many more relatives and friends. A memorial service will be held at 1:30 PM Sunday, April 24, 2016 at the Menomonie Alliance Church, 502 21st Street N, Menomonie, WI. Family and friend are welcome at the church one hour prior to the service. Military honors will be conducted by Menomonie Veterans Honor Guard. Burial will be in Rose Hill Cemetery in the Town of Dunn, Dunn Co. WI at a later date. Olson Funeral Home in Menomonie is serving the family.

The family of Alfred "Gus" Almquist created this Life Tributes page to make it easy to share your memories.