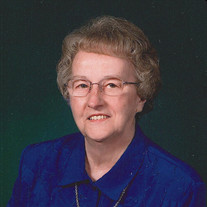 Adeline M. (Stansbury) Tronrud, age 82 of Boyceville, WI died Tuesday, October 29, 2019 at The Neighbors of Dunn County in Menomonie, with hospice. She was born April 16, 1937 near Prairie Farm, WI to Lawrence and Clara (Allram) Stansbury. She grew up on the family farm with her seven siblings. Adeline attended Bolin country grade school and graduated from Glenwood City High School. She then went to the Twin Cities to work at a bank for a short time and then Conagra Foods in Menomonie. On May 24, 1958, Adeline married Willard Tronrud. To this union two daughters were born, Peggy and Janelle. They were members of Trinity Lutheran Church in Boyceville and lived in Boyceville until 2018. Adeline then resided at The Neighbors of Dunn County until her passing. Adeline and Willard did some traveling. Adeline loved her family and enjoyed spending time with her grandchildren and great-grandchildren. Adeline is survived by her husband Willard; her daughters, Peggy (Greg) Olson and Janelle (Lonny) Caswell; grandchildren, Diane Harris and friend Dave Caruthers, Steve (Angie) Harris, Mike (Wendy) Hotter, Miranda (Nate) Wayne; great-grandchildren, Lexus, Ambria, Ravyn, Mackenzie, Blake, Brantley, Eliana, Cora, Halie, Mason; her sisters, Shirley and Nancy; a brother Roger (Helen) Stansbury; sisters-in-law Erna and Gerane; as well as nieces, nephews, other relatives and friends. She was preceded in death by her parents; sister Bonnie; and brothers, Laverne, Eugene and Gordon. Funeral Services will be held at 11:00 a.m. Monday, November 4, 2019 at Trinity Lutheran Church in Boyceville with Pastor Brad Peterson officiating. Burial will be at Tiffany Cemetery in Boyceville. There will be visitation one hour prior to the service at the church on Monday. Olson Funeral Home in Menomonie is serving the family.

The family of Adeline M. Tronrud created this Life Tributes page to make it easy to share your memories.