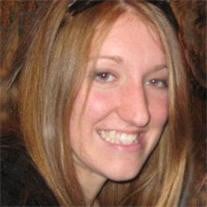 Abbe Jo Fritz, age 24, daughter of Ken Fritz of Hammond, WI and Teresa (Mike) Rogers of Menomonie, passed away peacefully on Saturday, August 10, 2013. Abbe was born June 16, 1989 in Maplewood, MN. She spent her first 13 years in Lino Lakes, MN where she was baptized and later confirmed in her Catholic faith at St. Patrick's Catholic Church in Hudson. Abbe graduated from St. Croix Central High School in Hammond, WI and then pursued her college education in Eau Claire and was currently employed at Menard's. Abbe loved many things in life including, dancing, showing horses, hunting, fishing, and just being outdoors. As she grew older she enjoyed Art and Theater, planning her own organic garden, learning to sew, and she recently started baking, specializing in her gourmet cupcakes. Abbe loved spending time with her family and made sure she was at all of her family's functions. She knew the value of things and cherished them. Abbe battled the challenges of Epilepsy for eight years and attempted to live a normal life. She was an advocate for the Epilepsy Foundation. Abbe is survived by her mother, Teresa (Mike) Rogers of Menomonie; her father, Ken Fritz of Hammond; her siblings, Angelique (Pat) Workman, Shelbe Fritz, Ellie Fritz, Rachel Rogers, Mary Rogers and Andrew Rogers; maternal grandparents, Jim and Mary Weyer of Woodville, WI; paternal grandmother, Bonnie Fritz of Cottage Grove, MN; niece and nephew, Adaline and Oliver Workman; niece and Godchild, Maggie Rogers; Godparents, Babette Weyer and Teri Armstrong; as well as numerous aunts, uncles, cousins and many friends. She was preceded in death by her paternal grandfather, Doug Fritz; maternal great-grandparents, Gibb and Pat Weyer. A Memorial Service will be held at 11:00 a.m. Thursday, August 15, 2013 at St. Joseph's Catholic Church in Menomonie, with Father Tom Krieg officiating. There will be visitation from 6:00 to 8:00 p.m. Wednesday at Olson Funeral Home in Menomonie, with a Prayer Service at 8:00 p.m. There will also be visitation at the church from 9:00 a.m. until the time of the service on Thursday.

The family of Abbe Jo Fritz Obituary created this Life Tributes page to make it easy to share your memories.